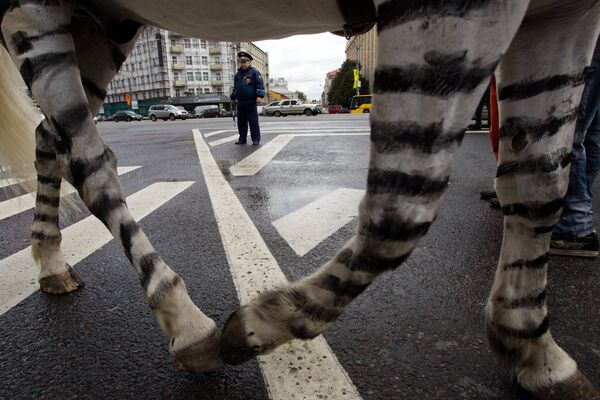 © RIA Novosti . Mikhail Fomichev
/
Go to the photo bank
Subscribe
Drivers on Russia's notoriously dangerous roads can feel like they've seen everything, but in Moscow on Friday there were plenty of double-takes as traffic stopped to let zebras cross the street.

Drivers on Russia's notoriously dangerous roads can feel like they've seen everything, but in Moscow on Friday there were plenty of double-takes as traffic stopped to let zebras cross the street.

On closer inspection, the zebras were just horses painted with black-and-white stripes, but they had a serious job to do as the traffic police took their "Safe Zebra Crossings" campaign, intended to encourage drivers to obey traffic rules and teach children road safety, to five of Moscow's busiest roads.

On Smolenskaya Square, in the shadow of the Stalin skyscraper that houses the Russian Foreign Ministry, several dozen people come for a closer look at the striped black-and-white horses and ponies in the first hour of the action.

"It's surprising, but some children know the traffic rules better than adults," says one of the officers.

The children, many from nearby schools, were happy to ride the "zebras," who appear calm and friendly despite being the center of attention.

"They look almost like real zebras," says 6-year-old Dasha, while drawing traffic lights and a zebra crossing the road on a blackboard.

Some 20 cans of paint were used to paint the animals, says Volodya, a pony's handler.

"The paint can be easily removed using water," he says, dismissing concerns by some animal rights activists. "This make-up is used by circus artists, so do not worry."

As a result, the number of accidents involving children dropped by 9.1 percent in 2009 compared with 2008, and the number of fatal accidents decreased by 16.9 percent, according to the Russian Interior Ministry's traffic department.

However, the statistics are still a long way from becoming a source of pride: a total of 846 children were killed and more than 20,000 were injured on Russia's roads last year.

Campaigns like this do yield results, says senior Moscow traffic police officer Artyom Ivanov. After spending summer in the country or at the beach, he says, children often forget that traffic in Moscow is quite dangerous, which sometimes results in fatal accidents.

"Our goal is saving children's lives. If we can save even one or two lives by organizing such campaigns, it's worth it."