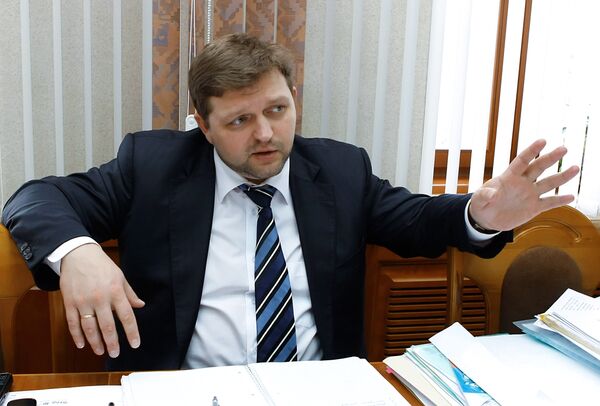 © RIA Novosti . Ruslan Krivobok
/
Go to the photo bank
Subscribe
Kirov Region Governor Nikita Belykh said he had to send his son to a boarding school in Britain because of the demands of his official position.

Kirov Region Governor Nikita Belykh said he had to send his son to a boarding school in Britain because of the demands of his official position.

"When I go out to work, he is still asleep, and when I get back, he is already asleep," Belykh wrote in his Livejournal blog, referring to his 7-year-old son, Yury.

"Neither I nor my wife can spend as much time with Yury as we should at his age," he added.

Belykh, a former leader of the Union of Right Forces, was appointed governor by President Dmitry Medvedev in December 2008.

Yury went to a school in Kirov last year, but Belykh said another factor in the decision was that he wanted Yury to grow up a normal boy, something he said could not happen in a Russian school because he would have a "special status" there as governor's son.

Belykh also said there were simply "no decent boarding schools in Russia that would ensure a child's all-round education and development."

The governor did not explain why his wife could not spend more time with their son.

Belykh's decision has drawn reactions in the Internet community varying from bewilderment to outrage. Some people point out that it is at odds with "his employer" President Medvedev's focus on family values while others question the ethics of it.

"It seems that Belykh's appointment as governor has caused him to sacrifice his son on the altar of Russian statehood," one blogger wrote.