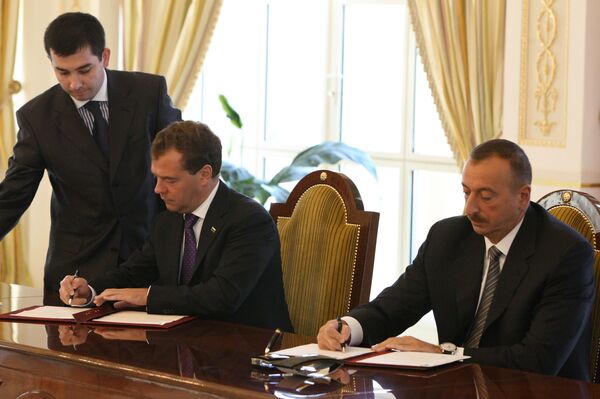 © RIA Novosti
/
Go to the photo bank
Subscribe
Azerbaijan has agreed to increase substantially its gas exports to Russia, the CEO of Russian energy giant Gazprom said on Friday.

Azerbaijan has agreed to increase substantially its gas exports to Russia, the CEO of Russian energy giant Gazprom said on Friday.

Russian President Dmitry Medvedev came for talks in Baku on Thursday. Medvedev and his Azerbaijani counterpart Ilkham Aliev concluded a new gas deal, stipulating a strong increase in the volumes of Azerbaijani gas supplies for Russia in 2011-2012.

"The signed contract is unique; it does not outline a ceiling volume of purchase. The basic agreement stipulates purchases at the level of 500 million cubic meters. Azerbaijan offered to increase it to 1 billion cubic meters," Alexei Miller commented on the new Russian-Azerbaijani gas agreement.

The agreement stipulates that supplies will be raised to 2 billion cubic meters in 2011, and in 2012 the figure will grow again, he added

"This means that Baku places a priority on Russia, on Gazprom. There are objective reasons for this," Miller said.

"We consider that this sphere strengthens relations," Aliev said.

Deliveries of Azerbaijani gas began on January 1 of this year after Azerbaijan signed a contract with Gazprom in October of 2009 to deliver 500 million cubic meters of gas annually up to 2015, with the option of renewing the contract in future.

Later the companies agreed to double gas deliveries to Russia, bringing the total amount of gas delivery from Azerbaijan to 1 billion cubic meters. In June, Miller said Gazprom was ready to purchase all of Azerbaijan's gas output.

Azerbaijani gas is considered an important factor in the success of the future Nabucco pipeline from the Caspian Sea to the European Union. The pipeline would bypass Russia and rival Moscow's planned South Stream, which is also expected to want to pump Caspian Basin gas to Europe.