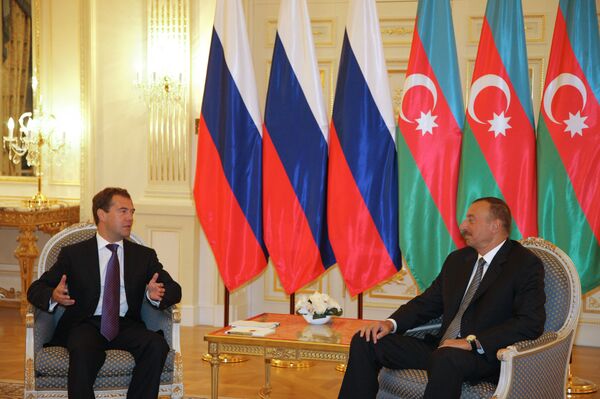 Russian President Dmitry Medvedev called on Friday for Azerbaijan and Armenia to intensify efforts to reach a settlement in their conflict over Nagorny Karabakh.

Russian President Dmitry Medvedev called on Friday for Azerbaijan and Armenia to intensify efforts to reach a settlement in their conflict over Nagorny Karabakh.

As a co-chair of the Minsk Group with France and the United States, Russia is at the center of international efforts to mediate a settlement, and Medvedev has brought the presidents of Azerbaijan and Armenia together on several occasions.

"These efforts are bringing results. The intensity should not decrease," Medvedev said at a news conference in Baku with his Azerbaijani counterpart, Ilham Aliyev.

"Russia is ready to continue perform its duties under the Minsk Group and as a neighbor. I am ready for the continuation of contacts and ready to discuss the most complicated issues that remain," he added.

Medvedev is on the second day of a two-day visit to Azerbaijan. In addition to the the long-running conflict between Azerbaijan and Armenia over Nagorny Karabakh, the two presidents discussed economic ties and cooperation in the Caspian Region.

Earlier this month, Aliyev said the conflict between Baku and Yerevan would be settled easily by Armenia withdrawing its "occupation forces" from the disputed area.

The conflict over Nagorny Karabakh first erupted in 1988, when the ethnic-Armenian region claimed independence from Azerbaijan and sought support from Armenia. Karabakh has been de facto independent since a 1991-94 war that claimed more than 30,000 lives on both sides.