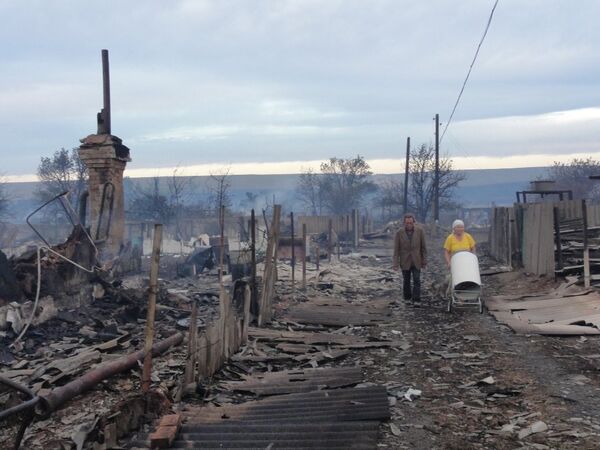 The region's governor Anatoliy Brovko also said that a number of people are missing.

Volgograd's authorities said that over 800 buildings had been destroyed by the flames.

Sources in the region's administration said almost 750 people have been evacuated from the disaster zone.

The Emergency Ministry said that all wildfires have now been extinguished in the Saratov Region.

The Russian Investigative Committee has said it sees signs of negligence in the actions of officials in the Volgograd region during efforts to put the fires out.

Russian President Dmitry Medvedev ordered that measures be stepped up in order to contain the new outbreak of fires, the Kremlin said.

Medvedev also ordered Russian Regional Development Minister Viktor Basargin to "organize the speedy rebuilding of houses and the payment of compensation to those affected."

Experts fear that strong winds could cause the new fires to spread to other regions, namely the Astrakhan Region and the republics of Tatarstan, Bashkortostan and Kalmykia, an emergencies spokesperson said.

The fires that ravaged the European part of Russia in August killed over 50 people and destroyed more than 2,000 homes.

The government's response to the disaster was widely criticized and the damage wreaked by the new blazes, coming just days after Emergency Situations Minister Sergei Shoigu declared the fires beaten, could provoke further criticism.