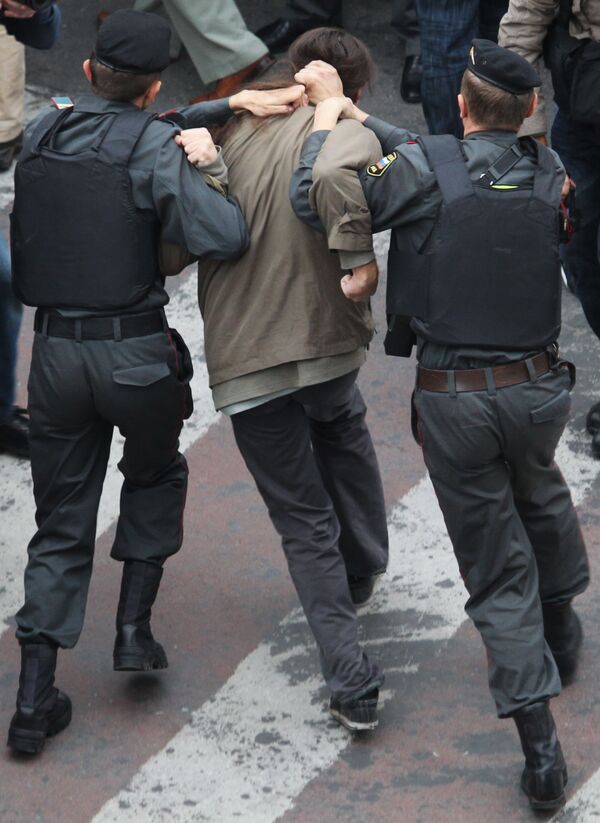 Police officers are trying to disperse a protest rally in downtown Moscow, and several prominent opposition leaders have already been detained.

Police officers are trying to disperse a protest rally in downtown Moscow, and several prominent opposition leaders have already been detained.

The Triumfalnaya Square rally was not sanctioned by the authorities, and police have also arrested a number of demonstrators, a RIA Novosti correspondent reported from the scene.

The crowd, many of whom are chanting "Freedom! Freedom!" is being pushed back by riot police.

Pyotr Biryukov, an official spokesman for the Moscow police department, said about 400 people gathered for the event, including 300 journalists.

"About 70 opposition activists were detained," he said.

The elderly chair of the Moscow Helsinki human rights group, Lyudmila Alexeyeva, said she left Triumfalnaya Square as the area was too crowded due to the square's reconstruction. The Moscow government closed the area in mid-August, citing plans to build an underground car park there.

"There was a very narrow space left, where it was almost impossible to stand. It was jammed, so I left the square almost immediately. Now I am following the news on the radio," she said.