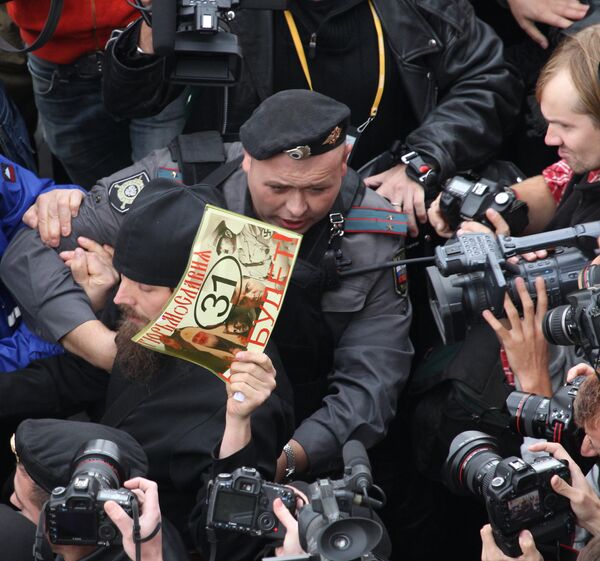 "Media reports said the organizers of the so-called 'Strategy 31' [protest movement] are planning to hold an unsanctioned... public event (meeting) on Triumfalnaya Square on August 31, 2010. The Moscow government considers such an intention a provocation," the statement said.

Last week, human rights activist Lyudmila Alexeyeva said the opposition would still gather on Tuesday on Triumfalnaya Square, but would not stage a protest.

The Moscow authorities have threatened that any attempts to stage a demonstration would lead to "the personal responsibility of its organizers and participants for violations of the law."

Tuesday's opposition meeting on Triumfalnaya Square could cause transport problems for Muscovites ahead of celebrations dedicated to the beginning of an academic year on September 1 and Moscow City Day in the first weekend of September, the Moscow city government statement said.

"On the eve of the Day of Knowledge and Moscow City Day, the course towards confrontation being pursued by those intending to hold an unsanctioned meeting looks like a challenge not only towards the authorities, but also towards the whole of society," the statement read.

Alexeyeva, Other Russia opposition party leader Eduard Limonov and Left Front opposition movement member Konstantin Kosyakin have already filed a claim to the Strasbourg court on violations made by the Moscow authorities on the right to freedom of assembly.