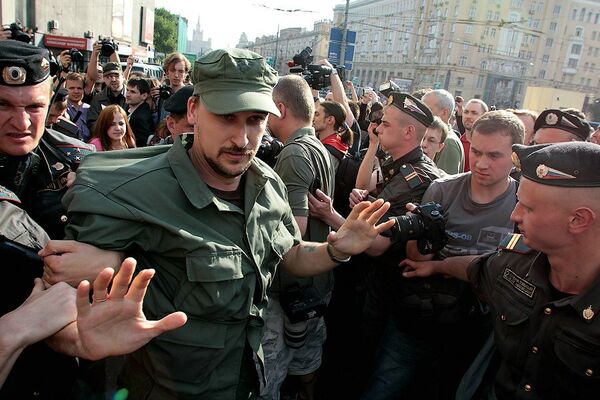 A delegation from the European Parliament's Subcommittee on Human Rights has arrived in Moscow to monitor an opposition demonstration on Tuesday, the head of the subcommittee said.

A delegation from the European Parliament's Subcommittee on Human Rights has arrived in Moscow to monitor an opposition demonstration on Tuesday, the head of the subcommittee said.

Russian opposition groups hold Marches of Dissent on the last day of each 31-day-month in defense of their right to freedom of assembly, as enshrined in Article 31 of the Russian Constitution.

The Moscow city authorities have regularly turned down requests from the Russian opposition to stage the rallies and recently announced plans to close the opposition's main protest site, Triumfalnaya Square, to build an underground car park.

Human rights activist Lyudmila Alexeyeva said last week that the opposition would gather on Tuesday on Triumfalnaya Square but would not stage a protest.

During their stay in Moscow, the EU delegation will meet with representatives of Russia's governmental and non-governmental human rights organizations and attend a court hearing on the Mikhail Khodorkovsky case.

They will then travel to the Russian North Caucasus town of Beslan to take part in a commemoration ceremony for the victims of the September 2004 tragedy.