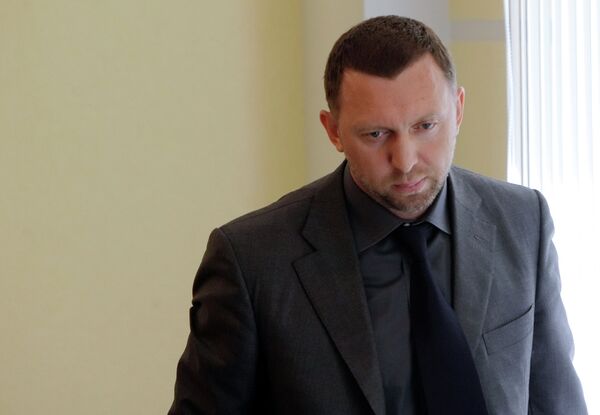 © RIA Novosti . Alexei Danichev
/
Go to the photo bank
Subscribe
Russian Oligarch Oleg Deripaska's private jet was not allowed to land on Monday at an airport in the northern Russian city of Norilsk, where Russian Prime Minister Vladimir Putin is to hold a meeting on Tuesday.

Russian Oligarch Oleg Deripaska's private jet was not allowed to land on Monday at an airport in the northern Russian city of Norilsk, where Russian Prime Minister Vladimir Putin is to hold a meeting on Tuesday.

Deripaska was due to take part in a meeting on the socio-economic development of Norilsk, to be led by Putin.

RusAl said that an hour before the departure, Deripaska's Basic Element holding company received a letter signed by the director general of the airport, which reported that "landing [at the airport] was impossible."

No reasons for the decision were given, RusAl said.

Norilsk airport said that one private aircraft had been denied landing space, but did not specify who it belonged to or the reasons for the decision.

RusAl and Interros holding company, controlled by tycoon Vladimir Potanin, have been embroiled in a bitter shareholder row over influence at Norilsk Nickel after RusAl lost one seat on Norilsk's board at the June 28 annual shareholders meeting.

RusAl now has only three seats, whilst Interros has kept four seats. Both companies each own a 25 percent stake in Norilsk Nickel.

Last Friday, Putin said the shareholder's row was damaging Norilsk Nickel, which is one of the world's largest producers of nonferrous metals.