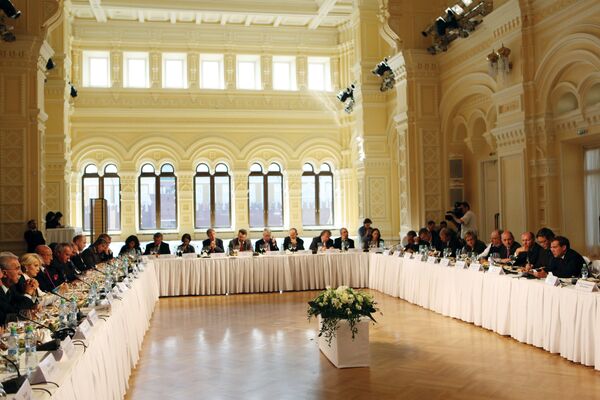 © RIA Novosti . Mikhail Fomichev
/
Go to the photo bank
Subscribe
The 7th Valdai Club Meeting, an expert forum for international specialists on Russia, will take place between August 31 and September 7 in St. Petersburg and Karelia.

The 7th Valdai Club Meeting, an expert forum for international specialists on Russia, will take place between August 31 and September 7 in St. Petersburg and Karelia.

The theme of this year's talks is "Russia: History and Future Development."

"No country... gives foreign experts such an opportunity to come, hold discussions with their colleagues and spend time in communication with the country's top authorities," Angela Stent from the U.S. Center for Eurasian, Russian and East European Studies (CERES) at Georgetown University said.

Prominent experts on Russia from 15 European countries, the United States and Asia will take part in the discussions. France's Helene Carrere d'Encausse, Britain's Geoffrey Hosking and the United States' Richard Pipes are among the experts expected to deliver reports.

Russian Prime Minister Vladimir Putin will join the talks on their final day.

The Russian News and Information Agency RIA Novosti, in association with The Council on Foreign and Defense Policy, the journals Russia Profile and Russia in Global Politics, and the newspaper The Moscow News, has hosted the Valdai International Discussion Club meeting every year since 2004.

The annual Valdai Club aims to create an international expert forum where key international Russia specialists can receive authoritative, reliable information about the growth and development of Russia and its society from leading members of the Russian elite.