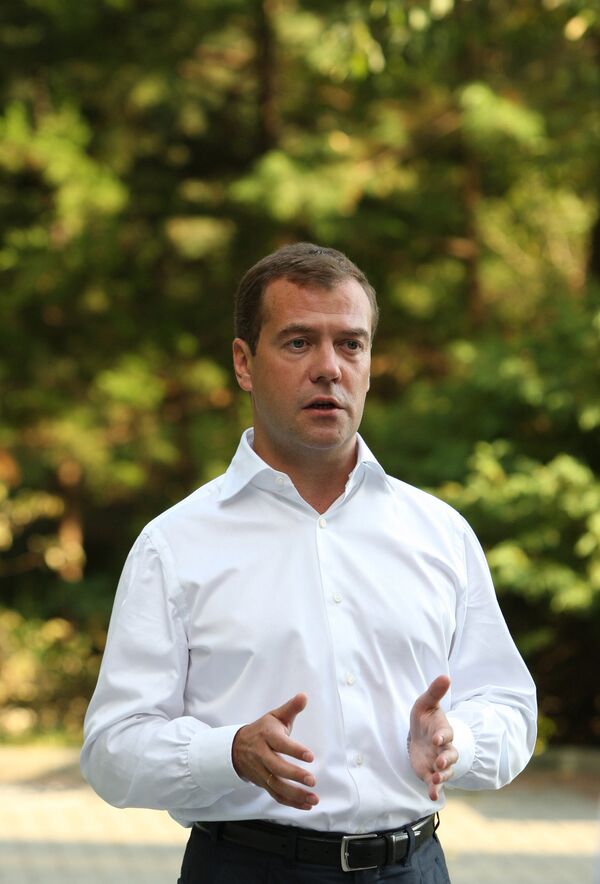 © RIA Novosti . Mikhail Klementiev
/
Go to the photo bank
Subscribe
Russian President Dmitry Medvedev ordered on Thursday the suspension of the construction of a controversial highway threatening a forest north of Moscow.

Russian President Dmitry Medvedev ordered on Thursday the suspension of the construction of a controversial highway threatening a forest north of Moscow.

The construction of the Moscow-St. Petersburg highway and the planned destruction of a section of the Khimki forest, part of Moscow's so-called greenbelt, has seen a large-scale grassroots protest movement spring up in Russia. Local residents and environmentalists say economic interests must not outweigh environmental concerns.

"Taking into account the amount of appeals [against the construction], I have made a decision...to suspend the implementation of the decree on the construction of the toll highway and to hold additional public and expert discussions," the president said in his video blog.

"They [the talks] have already been held, but because of the increased public response, I do not see anything bad in returning to the talks once again...in order to dot the i's and cross the t's," Medvedev said.

"We are celebrating victory...a victory for civil society... Even if the decision is not final, the fact itself that the president stopped the cutting down [of the forest] is a great victory," one of the activists who defended the forest, Alla Chernyshova, said.

Environmentalists have maintained a round-the-clock vigil at the forest since July 15, in order to stop "illegal" attempts to cut down trees.

Russia's Supreme Court has ruled that the decision to build the road does not violate the law, however the Khimki Forest Defense movement has filed a suit with the European Court in Strasbourg over the issue.

The Moscow-St. Petersburg toll highway was scheduled to be put into operation in 2015.