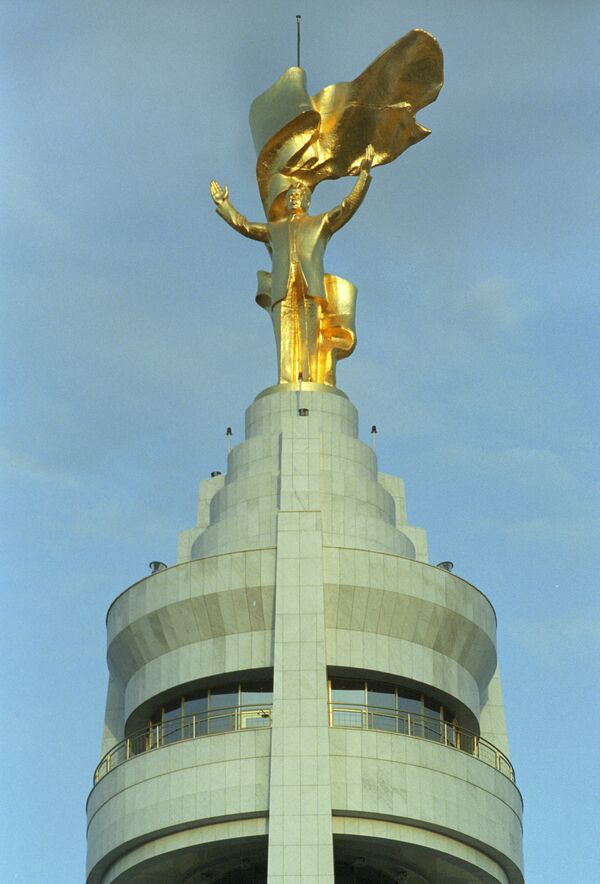 The gold-plated rotating statue of the first president of Turkmenistan, Saparmurat Niyazov, located on top of the Neutrality Arch in front of the presidential palace in downtown Ashgabat has been dismantled.

The gold-plated rotating statue of the first president of Turkmenistan, Saparmurat Niyazov, located on top of the Neutrality Arch in front of the presidential palace in downtown Ashgabat has been dismantled.

The 12-meter statue of the Turkmen leader, which rotated to always face the sun, was dismantled from its pedestal on Wednesday and workers are now removing the base of the monument on the palace square.

Opened for public in December 1998, the 230-foot-high (70-meter) tripod-like construction has been considered one of Ashgabat's most striking architectural landmarks. The tripod symbolized the Turkmen hearth and the statue was reminiscent of Niyazov, known among his countrymen as Turkmenbashi, or the "head of all Turkmen." Niyazov died in office on December 21, 2006, after serving as the first president of Turkmenistan since January 1990 after the fall of the Soviet Union.

Niyazov during his presidency renamed the days of the week and months of the year after family members. He was also known for inking textbooks that were mandatory to study in the country's schools.

The dismantled Neutrality Arch is being transported to the southern part of Ashgabat near the foothills of the Kopet Dag mountain range. Whether a new statue of the current president will adorn the top of the new monument depends largely on Berdymukhamedov himself.

After taking power in 2007, Berdymukhamedov also began placing portraits of himself throughout the country.

Most news programs focus primarily on the president's activities and frequently show him actively associated with sports.

"Efforts to remove once-omnipresent reminders of the late dictator seem in part aimed at highlighting the profile of current President Gurbanguli Berdymukhamedov," the Associated Press reported on Thursday.

The agency went on to highlight that "Since Niyazov's death, most of his formerly ubiquitous portraits have been removed from the outsides of public buildings. Berdymukhamedov has also ordered Niyazov's name to be excised from the patriotic oath published in newspapers daily and repeated at the end of all TV news programs."