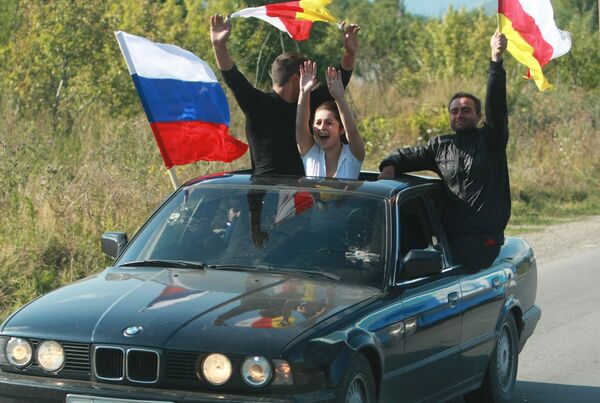 © RIA Novosti . Mikhail Fomichev
/
Go to the photo bank
Subscribe
The former Georgian republic of South Ossetia is celebrating its second anniversary of independence on Thursday.

The former Georgian republic of South Ossetia is celebrating its second anniversary of independence on Thursday.

Russia recognized Abkhazia and South Ossetia as independent shortly after a five-day war with Georgia in August 2008. Fighting broke out when Georgian forces attacked South Ossetia in a bid to bring it back under central control.

Nicaragua, Venezuela and the tiny island nation of Nauru are the only other countries to have recognized the republics.

Different events marking the date will be held in the republic, including a round table on the preliminary results of independence, South Ossetian presidential advisor on state and international protocol Zhanna Zaseyeva said.

Medvedev and Kokoity have already met twice this year - during the Victory Day celebrations in Moscow on May 9 and at a horse racing event in the Southern Russian city of Rostov-on-Don on June 1.

Since it recognized the independence of South Ossetia and Abkhazia, Moscow has been the guarantor of the republics' security.