Belarus: Free passage to an empire of the soul 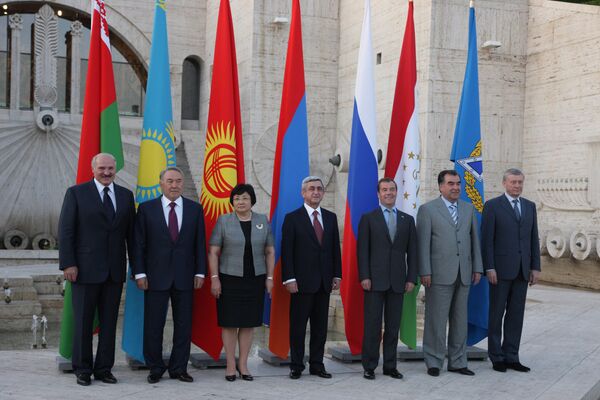 The recent decision made at the Collective Security Treaty Organization summit for presidency of this organization to pass to Belarus in December 2010 came as a surprise to observers.

The recent decision made at the Collective Security Treaty Organization summit for presidency of this organization to pass to Belarus in December 2010 came as a surprise to observers. Belarusian opposition web portals had hoped to savor the difficulties Alexander Lukashenko was to face in his contacts with Russian President Dmitry Medvedev or the leader of Kyrgyzstan Roza Otunbayeva.

After all, much of what Lukashenko has said regarding the Russian president over the past few months has been very nearly insulting while relations with Roza Otunbayeva soured after Lukashenko gave political asylum to former Kyrgyz President Kurmanbek Bakiyev, whom Kyrgyzstan wants to see extradited.

Politics today is a tough and unsentimental affair. That's why both Medvedev and Otunbayeva confined themselves to the protocol when meeting with Lukashenko. Any hasty action or ill-considered statements could have cost billions of dollars. Like it or not, Lukashenko is currently the head of a crucial transit country. As for manners and self-control, politicians across the post Soviet space have always struggled with them.

"Our president always says what he thinks. That's why we vote for him," said Alexei Vasilkov, an expert at the Information Analysis Center under the Belarusian president, commenting on Lukashenko's statements at a recent RIA Novosti round table. So, what does the Belarusian president think and want? At the round table event, Vasilkov gave quite an accurate account of the president's thoughts and wishes: "We are not against an empire, we support it, but you will have to pay for this empire."

However, the Belarusian official media feeds its domestic audience something completely different: there the word 'empire,' as in the Soviet era, is used in a negative sense, and for the last 13 or 14 years the media has been promoting the protection of Belarus' national sovereignty at all costs. "During this time a generation has grown up in Belarus for whom the country's independence is an inviolable value. The possibility of effectively uniting Russia and Belarus was lost in the 1990s," believes opposition activist and renowned poet Vladimir Neklyayev, nominated by the Rada of Belarusian Intelligentsia for presidency.

Belarus is due to hold presidential elections no later than February 2011. Alexander Lukashenko's major opponent is not the opposition but the poverty lurking beyond those clean Belarusian cities, so loved by Russian tourists. Lukashenko can borrow some of the money from the European Union. But the Belarusian president is used to getting most of the money he needs from Russia through a now traditional mixture of fraternal ties, pressure, appeals to the past and insults.

The friendship between the Russian and Belarusian peoples is no myth, nor is it an abstract concept. Exploiting it for cash is dishonorable. That is the message sent by the Kremlin in their recent expose of Lukashenko's double dealing on the issue of Belarus officially acknowledging the independence of South Ossetia and Abkhazia. Following the face-off between Medvedev and Lukashenko orchestrated by the two countries' media, this is what seems to have happened: Lukashenko made a promise, in front of CSTO member states, to recognize the independence of South Ossetia and Abkhazia but later declined to do so because he did not receive the promised trade preferences from Russia.

Russia can easily cope without Belarus' recognition of its allies in the Caucasus. But one is left with the impression that Russian-Belarusian relations are intentionally reduced to a mercantile level. Intellectuals have been almost completely excluded from the establishment of the Union State. Belarus is largely to blame for this because part of the country's intelligentsia has taken an anti-Russian stance. However, they are beginning to take a sober view of the situation. The split from Russia above all hit Belarus' creative intellectuals, especially writers. It has been many years since Belarus produced a world-famous writer or cultural figure. In the past, Belarusian writers used to get promoted through Russia, as only through Russian translations the names of Vasil Bykov and Alexei Karpyuk became known in the world. Such promotion is currently not an option. Vladimir Neklyayev, as a representative of the Soviet creative intelligentsia, regrets this development.

"We need to preserve those elements of the Union State that are already in place. They pose no danger to Belarus' sovereignty," the 64-year old writer and poet emphasizes. "However, we should give up the idea of a full union between Belarus and Russia. It would not be a loss, since this idea has only been used to get money from Russia. Now Lukashenko is using the Customs Union for the purpose, insisting on special trade conditions with Russia and the EU. In fact, he has the funds to compensate for the losses resulting from higher duty rates on Russian oil but he keeps saying that he has to borrow these funds. To put it bluntly, Lukashenko simply pretends that his country is poorer than it is."

For the Belarusian opposition, Neklyayev's call to keep the Union State sounds like a hymn of love to Russia. That's why Zenon Poznyak, ex-leader of the Belarusian National Front, has tagged Neklyayev as a "pro-Russian" politician. This may be the reason why the Belarusian KGB searched the premises of everyone participating in Neklyayev's "Tell the Truth" public movement this May.

The Belarusian authorities seem to realize that "pro-Russian" politicians will pose a danger in the future. Anti-Russian politicians have already had their say and Lukashenko seems to have added what they said to his armory.