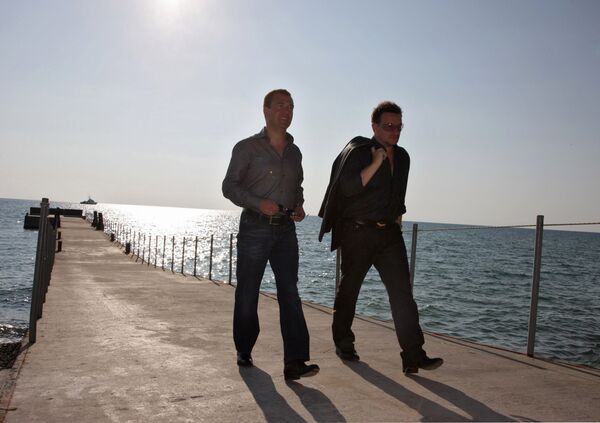 The leader of U2 Bono said he wants to learn more about Russia.

The leader of U2 Bono said he wants to learn more about Russia.

On Tuesday, Bono met with Russian President Dmitry Medvedev ahead of the U2 concert due in Moscow on August 25 at the presidential summer residence in the Black Sea resort city of Sochi.

Bono said he had arrived in Russia like a student, saying he had a lot to learn about Russia.

Bono also told the Russian president that they have some differences in taste since Medvedev is a Deep Purple fan and Bono is a Led Zeppelin fan.

However, Medvedev said he did not want to restrict his conversation with Bono to only music.

Bono actively works in fighting HIV and AIDS around the world. He also organizes many charity events along with the other members of U2 as well as other celebrities.

"This social activity you are engaged in, you and your colleagues, gets great respect from people," Medvedev said. "You do important things because taking care of people is not only a matter of politics," he continued.

"Each of us should actually contribute into, as it seems, [relieving the] very complex problems of health, the fight against poverty, cleaning up the aftermaths of crises," the Russian leader said. "And the fact that you are actively engaged in this, I think, is cool."

On Tuesday, Medvedev also said he will support the leader of U2 Bono in his efforts to fight HIV/AIDS.

After the conversation, Medvedev and Bono took a stroll along the Black Sea coast.