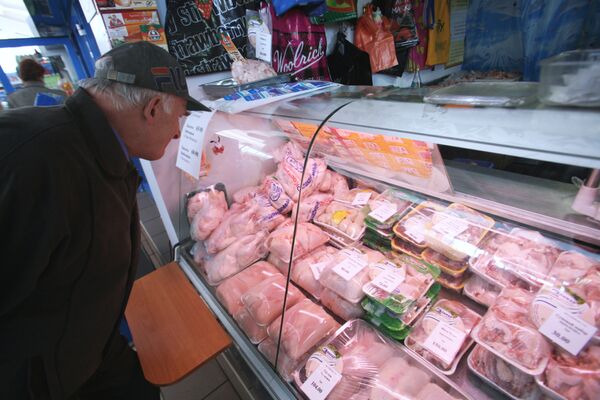 The U.S. Poultry and Egg Council (USAPEEC) has given assurance that all poultry meat products exported to Russia contain no salmonella bacteria, the council said in a statement.

The U.S. Poultry and Egg Council (USAPEEC) has given assurance that all poultry meat products exported to Russia contain no salmonella bacteria, the council said in a statement.

The USAPEEC statement came in response to fears that poultry exported to Russia may contain salmonella after some 550 million eggs were recalled in the United States that were distributed in 14 different states.

The United States has not exported eggs to Russia since the end of 1999.

"We would certainly characterize this as one of the largest shell egg recalls in recent history," Sherri McGarry of the Food and Drug Administration told CNN in a conference call on Thursday.

"In light of reports in the U.S. media of an outbreak of salmonella caused by contaminated eggs, we are assessing the situation to find out if there is a need to toughen [regulations on] poultry imports from the United States," Russia's chief sanitary official, Gennady Onishchenko, announced on Monday.

On Monday, Russia's sanitary watchdog, Rosselkhoznadzor, expressed concerns over the outbreak of the salmonella virus in the United States. Russia has asked the American Food and Drug Administration to submit a list of the farms that announced product recalls.

On Jan. 1, 2010, Russia introduced new sanitary standards, banning the treatment of meat with chloride of a higher concentration than in drinking water. A difficult negotiating process between Russia and the United States began, while Russia was also negotiating poultry supplies with other states as well as trying to increase domestic production.