Medvedev promises to support U2 Bono in fighting AIDS 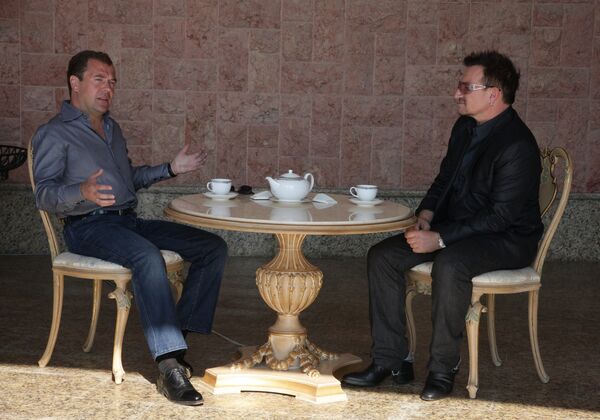 Russian President Dmitry Medvedev said on Tuesday he will support the leader of U2 Bono in his efforts to fight HIV/AIDS.

Russian President Dmitry Medvedev said on Tuesday he will support the leader of U2 Bono in his efforts to fight HIV/AIDS.

Medvedev met with Bono ahead of the U2 concert due in Moscow on August 25. Bono told the Russian president that the problem of transferring the infection from mother to child can be solved and asked Medvedev to recommend Russian companies, which could help in working on the issue.

"This is a good program, a very concrete program and a very good way to solve problems," Medvedev said. "We will think of how Russia may participate to solve these problems," he continued.

Bono actively works in fighting HIV and AIDS around the world. He also organizes many charity events along with the other members of U2 as well as other celebrities.

The State Research Center for Virology and Biotechnology, Vector, has successfully accomplished the development of a candidate HIV vaccine and obtained permission to test it on volunteers, the center's press service said in July.

The vaccine that Vector has developed is one of the strongest and most advanced vaccines in the world, the press service statement said.

The first phase of testing the vaccine on volunteers will be completed in 2010.

The total number of registered HIV cases in Russia since 1987 has already reached half a million.