Russia extends lease on military base in Armenia through 2044 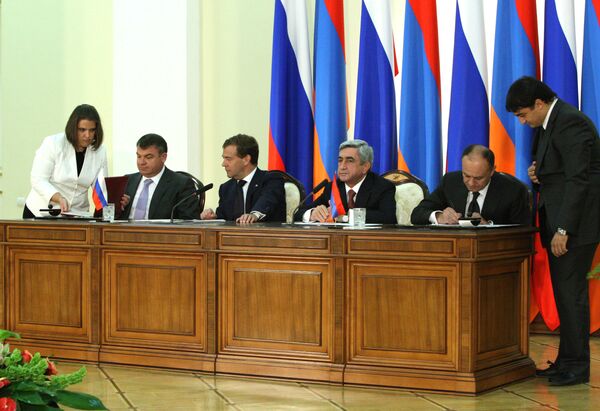 Russia and Armenia on Friday signed amendments to a 1995 bilateral treaty extending Russia's use of a military base near Armenia's border with Turkey through 2044.

Russia and Armenia on Friday signed amendments to a 1995 bilateral treaty extending Russia's use of a military base near Armenia's border with Turkey through 2044.

The document was signed by the countries' defense ministers as a result of negotiations between Russian President Dmitry Medvedev and Armenian President Serzh Sargsyan. Medvedev is currently on a state visit to Armenia.

Russian Defense Minister Anatoly Serdyukov said the term of the 1995 deal on the base in Gyumri, Armenia's second largest city, had been extended from 25 to 49 years.

Asked by reporters about the cost of the lease on the base, he said "there is no question of money."

Some reports have said that the mission of the Russian troops was being expanded, but Foreign Minister Sergei Lavrov said the deployment locations for Russian troops had been agreed for a long time and were not affected by the new document.

Lavrov and Serdyukov both said the only thing that had changed was the length of the lease.

"One thing has changed - the extension to 49 years," the defense minister told RIA Novosti.

Russia's 102nd Military Base has been deployed in Gyumri since 1995 and is part of a CIS integrated air defense system. It is under the command of Russia's North Caucasus Military District.

There are around 5,000 personnel at the base, as well as S-300 surface-to-air missile systems and MiG-29 fighters.