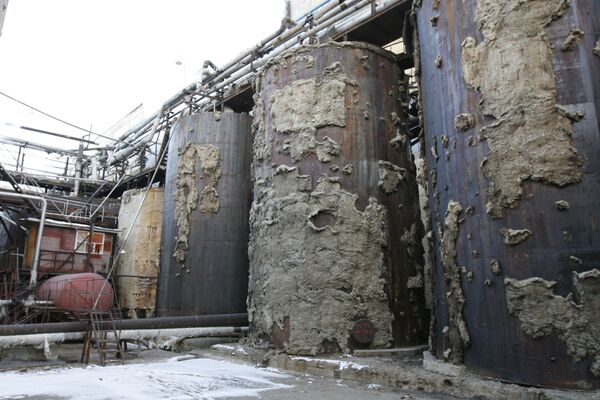 According to preliminary information from the plant's general director, two workers who were installing scaffolds at the mill suffocated after inhaling chlorine vapors on Tuesday.

"A group of medical experts has been formed to determine the cause of death of the workers," Vladimir Salovarov said.

The mill has long been criticized for its hazardous impact on the environment and health.

"I can confirm that two workers died while installing scaffolds at the mill. Preliminary cause of their deaths has been identified as asphyxiation," Konstantin Proshkin, the mill's general director, told RIA Novosti.

The mill reopened in February after Prime Minister Vladimir Putin signed a resolution excluding the production of pulp, paper and cardboard from the list of operations banned in the Baikal nature reserve.

A public campaign to close or convert the Baikal Pulp and Paper Mill, built in 1966 on the shores of the world's largest freshwater lake, became one of the symbols of Glasnost, the "openness" policy proclaimed by Soviet leader Mikhail Gorbachev in the late 1980s.

It involved the nation's leading statesmen and literary figures and forced the Soviet government to promise a halt to pulp production by 1993.

The collapse of the Soviet Union in 1991 delayed the implementation of that decision, and it was only in October 2008 that the plant switched over to a closed water cycle, preventing the discharge of waste into the lake, which is a UNESCO World Heritage Site.

However, the new regime proved unprofitable and the plant was forced to shut down for about 14 months.