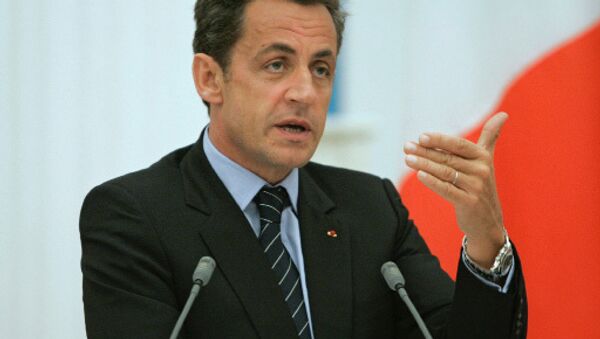 © RIA Novosti . Dmitri Astakhov
Subscribe
Recent floods in Pakistan and in Central Europe, as well as wildfires caused by record-high summer temperatures in Russia, have prompted the European Union to consider setting up a pan-European emergencies agency. Brussels has suggested this several times before when large-scale natural disasters struck the European continent.

Recent floods in Pakistan and in Central Europe, as well as wildfires caused by record-high summer temperatures in Russia, have prompted the European Union to consider setting up a pan-European emergencies agency. Brussels has suggested this several times before when large-scale natural disasters struck the European continent.

Now Paris has taken up the idea. President Nicolas Sarkozy expressed his view of the matter in a letter to the European Commission's president, Jose Manuel Barroso. Given that his native Portugal has been suffering from fierce wildfires this summer, he is likely to take Sarkozy's concerns seriously.

The French leader is proposing, in short, to create a common rapid-response force in the EU that could carry out rescue operations in countries hit by emergencies, both in and outside Europe.

The French began discussing the possibility of creating that kind of force a week ago when Minister for EU Affairs Pierre Lelouche said that Paris was already working on a plan to make that happen. Sarkozy's August 15 letter to Barroso is an official testimony to this.

According to Lelouche, this force may well include international participation, with Russia and the United States having allegedly expressed a desire to join.

The particulars of Sarkozy's initiative are now being set on paper and will be submitted to Brussels shortly.

Previously, the EU toyed with the idea of setting up a common firefighting force, but has thus far failed to translate it into reality. A pilot EU fire brigade began operating last year with two Canadian jets, Canadair CL-215 models from Bombardier. This kind of jet is capable of taking aboard about 5.5 tons of water within 10 seconds. (For the sake of comparison, the Russian Be-200 firefighting jet takes on 12 tons of water within 14 seconds. Greece, Italy and Spain have expressed the desire to buy it.) As part of the EU firefighting force, the CL-215s carried out six missions a year ago to combat fires in Portugal, Greece, Italy and France.

French officials believe that wildfires could be extinguished more effectively and rapidly through a centralized EU force with a common monitoring system.

Wildfires that ravaged Greece last year provided evidence in favor of such a system. The Greeks spent a long time looking all across Europe for firefighting jets that were not on duty, and the fire had time to get dangerously close to Athens.

The EU already has a fairly strong firefighting fleet. According to the European Statistical Committee, there are 300 jets and helicopters that are specially adapted to fight fires.

The pilot project of a common firefighting service (which uses the two Canadair CL-215s) is to be completed this year. France's Corsica serves as its base. The island is an ideal harbor for servicing the southern Mediterranean. About 3.5 million euros will be spent on the two-year project.

Setting up pan-European brigades for combating wildfires is an ambitious and challenging project, and not without controversies. The zone most at risk lies in the south, along the coastal areas of the Mediterranean and surrounding seas. Northern Europe is rarely affected. Which is why northerners, including the Swedes, the Finnish, the Dutch, the Danish, and the British, are not particularly enthusiastic about the project. They are reluctant to bankroll operations that will primarily serve their southern neighbors and argue that a common wildfire emergency center will make the southerners complacent and irresponsible, unwilling to take preventive measures such as growing fire-resistant forests and maintaining water balance in soil. Hopefully, Sarkozy's initiative and support from Russia and the U.S. will break the ice.

The United States is currently the world's leader in wildfire management, with a scale of monitoring, prevention, and outlay unsurpassed by any other country. The U.S. Agriculture Department's Forest Service employs a staff of nearly 35,000, based in 750 communities from coast to coast, on and off the mainland. More than 10,000 of its employees are directly involved in firefighting operations. Monitoring is done there using satellites, remotely piloted planes, and inspectors on the ground. In addition, specially developed computer software makes it possible to gauge the moisture level of the soil and young tree trunks, the directions in which wildfires may spread, and their intensity and character. This makes it possible to make informed decisions concerning preventive logging and flooding, as well as to promptly deploy aircraft with firefighting brigades and necessary equipment on board.

Alongside professionals, the U.S. Forest Service engages up to 10,000 volunteers every summer. Most of these are young people, and they are instructed in gathering information about the state of forests as well as basic extinguishing skills.

The scale of U.S. appropriations for the prevention of wildfires, the preservation and development of forests and parks, and for forestry research, is staggering. Last year, the agency received $5.5 billion (approximately 167.9 billion rubles) to manage the country's 193 million acres of forest (780,000 square kilometers). About 42% of that amount ($2.3 billion) goes to combat wildfires.

Russia has ten times as much forest to take care of (11.6 million square kilometers), however, the amount of money allocated for the purpose is a far cry from what the Americans spend so that they can breathe easy.