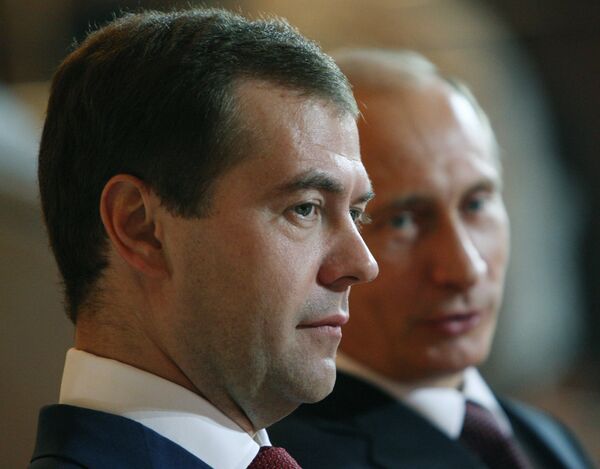 The levels of trust in the Russian leaders have risen in August compared to June but fell in comparison to January, the survey said.

A total of 57% of Russians said in August they trusted Medvedev (the figure stood at 53% in June and 62% in January).

Putin, the poll revealed, is again considered more trustworthy than Medvedev. The poll showed 64% trusted the prime minister (in June the figure stood at 61% and 69% in January).

The survey was held August 7-8 in 100 residential areas of 44 Russian regions. A total of 2,000 respondents were interviewed.

Russian President Dmitry Medvedev said in April he did not rule out running for president again in the 2012 election.

Medvedev also said that for him to run in the election, "at least the results of my work should be acceptable for our citizens."

Medvedev, Putin's close ally, succeeded him as president in 2008. The two men then formed a "tandem," with Putin becoming prime minister.

Putin, who along with Medvedev is among Russia's most popular politicians, has also not ruled out running in the next presidential election.