Main venue for Moscow opposition marches to be closed "for renovation" 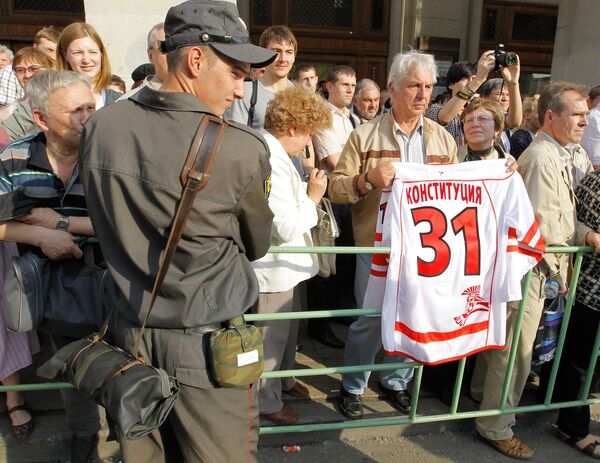 © RIA Novosti . Ilya Pitalev
/
Go to the photo bank
Subscribe
The Moscow authorities have announced they will close Triumfalnaya Square in downtown Moscow to build an underground car park, while the opposition says the move is to prevent them from gathering at the site.

The Moscow authorities have announced the closure of Triumfalnaya Square in downtown Moscow to build an underground car park, a movethe opposition says  is aimed at preventing them from gathering at the site.

Opposition groups have chosen Triumfalnaya Square as a venue for Marches of Dissent, held on the last day of each 31-day-month to defend the right to freedom of assembly, as enshrined in Article 31 of the Russian Constitution. Russian opposition and human rights activists have already applied to the Moscow City Hall to hold a March of Dissent on August 31.

"In the next few days we will begin construction of a multi-level underground car park for 1,000 cars instead of a surface car park on Moscow's Triumfalnaya Square," Moscow's city planning and construction department said in a statement.

The department gave no exact date when construction will begin, or a deadline for completion of the project.

A March of Dissent organizer, Alexander Averin, told RIA Novosti that opposition activists "had an idea" that the square might be closed.

"We will come anyway. They won't seal off the whole of Moscow. We will find another suitable site nearby and gather there," he told RIA Novosti.

Lyudmila Alexeyeva, a Russian human rights activist and head of the Moscow Helsinki Group, said the organizers would study whether the construction project is authorized by Moscow's city development plan.

"We will see... we will check," she said in an interview with RIA Novosti.

Other opposition leaders told the gzt.ru news portal that by "staging" the Triumfalnaya Square construction the authorities "acknowledged the power of the opposition."

"Our authorities are not inclined to search for clever and cunning solutions. They prefer to put concrete blocks and cordon the area off to imitate some kind of [construction work] there. The staged nature of this [construction] project is evident to me," said Ilya Yashin, who heads the opposition Solidarity movement.

"I think it is good, it proves that the opposition is powerful and able to provoke these guys into agonizing and freaking out... These grandiose [construction] plans are a compliment for me as a person who started this [opposition] gathering," the Other Russia controversial writer and activist Eduard Limonov was quoted as saying by gzt.ru.

The Moscow city authorities have regularly turned down requests from Russian opposition groups to stage March of Dissent rallies, on the grounds that the site has already been chosen as a venue for another event. Unsanctioned opposition rallies as a rule result in police violence and detentions.

The Moscow city authorities have repeatedly proposed a number of alternative venues for protestors, but they were all rejected.

In mid-July, city officials authorized a bike festival on Triumfalnaya Square from July 30 through August 1 in what many saw as a deliberate move to foil the opposition's plans. Around 200 protesters turned out for a March of Dissent rally on nearby Triumfalnaya Square on July 31, some 75 were hauled away in police vehicles.

Nearly 200 protesters were detained during a rally on May 31, causing public outrage, as riot police far outnumbered demonstrators and people with disabilities as well as a World War II veteran were reportedly among those detained.