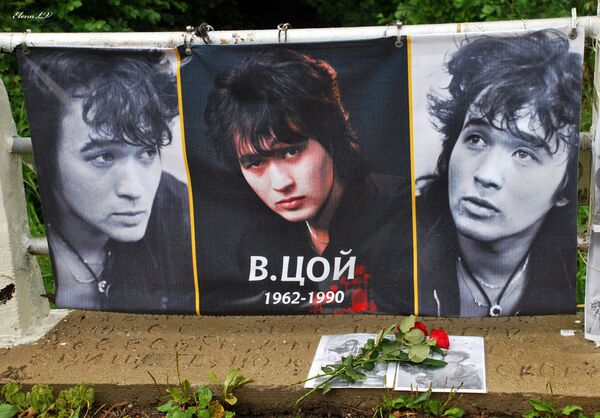 Hundreds fans of the perestroika-era rock star Viktor Tsoi on Sunday gathered together in the Russia's second City of St. Petersburg to commemorate his 20th death anniversary.

Tsoi, an ethnic Korean, the vocalist and guitarist of the legendary Kino rock group, died in August 1990 at the age of 27 in a car crash in the then-Soviet republic of Latvia.

Fans of the Kino rock band, which Tsoi had been heading since its establishment, paid tribute to the rock star and sang his songs, RIA Novosti correspondent reported.

Kino were one of the Soviet Union's first rock groups, and along with Boris Grebenshchikov's Akvarium were part of the St. Petersburg (then Leningrad) underground rock scene. Although they drew heavily on Western rock and New Wave bands, Tsoi and his group created a uniquely Russian sound that mixed acoustic and electric guitars with simple yet oddly philosophical lyrics.

Although the group was essentially apolitical, Tsoi's music encapsulated the younger generation's growing disillusionment with the Soviet system. "I knew everything would turn out bad, but I didn't know so soon," he sang in the song Filmi (Films).

Despite struggling against state hostility in their early years, Mikhail Gorbachev's perestroika saw Tsoi achieve a nationwide fame that culminated in a concert at Moscow's Luzhniki stadium in June 1990. It was the last time he would appear on stage.

After Tsoi's death, an impromptu shrine to the singer was established just off the central Moscow pedestrian street, the Old Arbat, where fans, many of them too young to remember the Soviet era, still gather at the graffiti-covered wall to sing his songs.