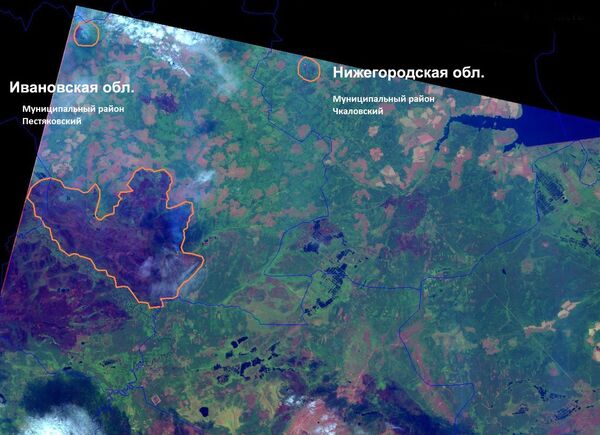 © Photo : SpotImage, SCANEX
Subscribe
The NASA Terra and Aqua satellites registered almost 100 fewer hotspots on August 11 than on the previous day, according to the ScanEx website that receives information from the satellites.

The NASA Terra and Aqua satellites on Wednesday registered some 100 fewer hotspots than on Tuesday, according to the ScanEx website that receives information from the satellites.

The Aqua satellite, equipped with an atmospheric infrared sounder, and Terra, equipped with a thermal emission and reflection radiometer, registered 494 hotspots from fires across Russia on August 11, compared with 582 just a day earlier.

The decrease in the number of hotspots identified is partially due to cloud coverage in several Russian regions. "Atmospheric front is currently passing through Voronezh, Lipetsk, Ryazan, Vladimir and Ivanov regions. In fact, all the western half of Ryazan region is covered with thick clouds, that's why we can't speak about strong decrease in number fires," Nadezhda Pupysheva from ScanEx said.

A scorching heat wave has gripped much of European Russia since mid-June, which coupled with the worst drought since the 1970s has made the countryside particularly susceptible to wildfires.

Thousands of emergency workers and military personnel have been working round the clock for almost three weeks to fight the fires in 22 regions, which have so far killed more than 50 people and left over 3,500 homeless. The immediate economic cost of the fires has been estimated at $15 billion.