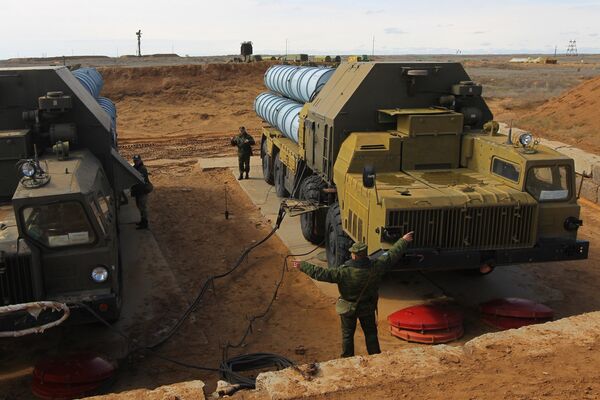 Russia has deployed S-300 air defense systems in Georgia's breakaway region of Abkhazia, the commander of the Russian Air Force said on Wednesday.

Russia has deployed S-300 air defense systems in Georgia's breakaway region of Abkhazia, the commander of the Russian Air Force said on Wednesday.

"We have placed the S-300 systems in Abkhazia to protect the airspace of Abkhazia and South Ossetia in conjunction with other air defense means deployed by the Ground Forces," Col. Gen. Alexander Zelin told reporters.

He added that the air defense assets deployed in the two former Georgian republics will also help to prevent any violation of Russian airspace and destroy any airborne "intruders" regardless of their purpose.

Zelin was not specific on the number and type of the S-300 deployed in Abkhazia.

The advanced version of the S-300 missile system, called S-300PMU1, has a range of over 150 kilometers (over 100 miles) and can intercept ballistic missiles and aircraft at low and high altitudes, making it effective in warding off potential air and missile strikes.

Russia recognized Abkhazia and South Ossetia two weeks after a five-day war with Georgia in August 2008, which began when Georgian forces attacked South Ossetia in an attempt to bring it back under central control.

The military bases are located in Gudauta, Abkhazia, and in South Ossetia's capital Tskhinvali. Each base is likely to host up to 1,700 servicemen, T-62 tanks, light armored vehicles, air defense systems and various aircraft.