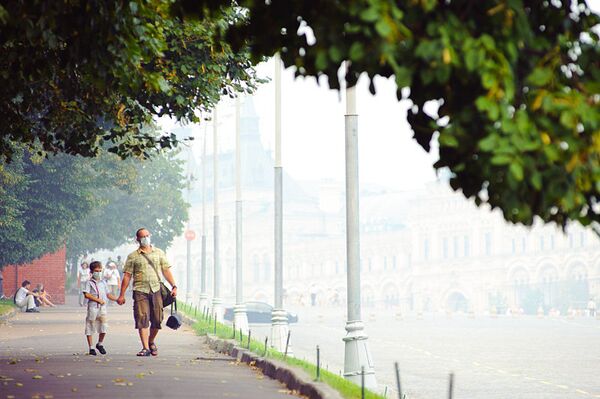 Concentration of carbon monoxide in Moscow's air has abated, however may slightly increase in the evening, an expert from the State Environmental Protection Organization Mosekomonitoring said on Tuesday.

Concentration of carbon monoxide in Moscow's air has abated, however may slightly increase in the evening, an expert from the State Environmental Protection Organization Mosekomonitoring said on Tuesday.

"Currently, the concentration of carbon monoxide in Moscow is within the norm," she said.

Rain in several of Moscow's districts has helped disperse the smog that has been suffocating Muscovites over the last few days.

"But there is a probability that the concentration of harmful substances will slightly rise by evening," she added.

An emergency situation caused by wildfires and burning peat bogs in Moscow region have continued unabated for the last couple of weeks.

Even Russian Prime Minister Vladimir Putin took part in extinguishing forest fires on Tuesday in Ryazan Province on board an amphibious firefighting airplane.

A scorching heat wave has gripped much of western Russia since mid-June, sparking wildfires and causing the worst drought in decades.

Moscow and a dozen other cities have been wrapped in a thick layer of smog. Health experts say pollution levels are so high that breathing has become as dangerous as smoking several packs of cigarettes a day.

The record-breaking heat wave in Moscow will continue through mid-August, meteorologists say.