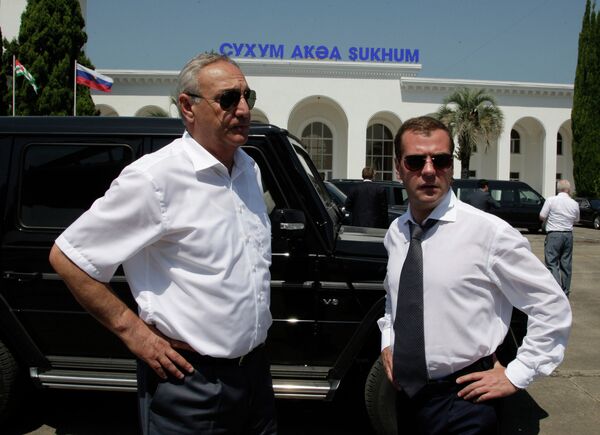 Tbilisi expressed an official protest over the Russian president's recent visit to the former Georgian republic of Abkhazia, the Georgian Foreign Ministry said.

Tbilisi expressed an official protest over the Russian president's recent visit to the former Georgian republic of Abkhazia, the Georgian Foreign Ministry said.

Russian President Dmitry Medvedev on August 8, paid his first ever visit to Sukhumi since Russia recognized the independence of the former Georgian republic two years ago.

The president said Russia would develop an entire range of relations with Abkhazia and there was no alternative to this.

"This so-called visit to the territory of a sovereign state, made in the style of Soviet leaders, is yet another cynical act," the Georgian Foreign Ministry said, adding Medvedev's visit was an attempt to escalate the conflict.

Long-standing tensions between Russia and the former Soviet republic of Georgia turned violent during a five-day war in August 2008.

The war started in the early hours of August 8 when Georgia launched a military offensive against South Ossetia, where most residents are Russian passport holders. Russia reacted swiftly, expelling Georgian troops from South Ossetia and forcing them deep into Georgia amid accusations on both sides of human right abuses.

Two weeks after the end of the war, Russia recognized both South Ossetia and Abkhazia, which both split from Georgia after the collapse of the Soviet Union. The move was heavily criticized by Western powers. So far, only Venezuela, Nicaragua and the tiny island nation of Nauru have followed suit.