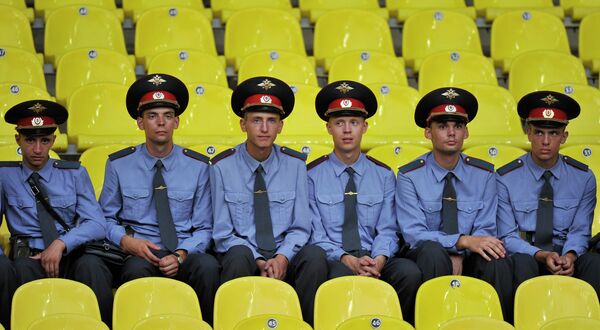 © RIA Novosti . Alexander Vilf
/
Go to the photo bank
Subscribe
A new police law in Russia put on the Internet for public discussion includes restrictions on how much force law enforcers may use against individuals.

A new police law in Russia put on the Internet for public discussion includes restrictions on how much force law enforcers may use against individuals.

The website to publicly discuss the new law uses Russia's .ру domain for the Internet in Russian which contains only letters from the Russian alphabet. The bill was posted on законпроект2010.ру on Saturday.

One of the new restrictions is the use of nightsticks. According to the new law under discussion, police would no longer be allowed "to deliver blows with a truncheon to the head, neck, collarbone area, abdomen, or to the genitals." The new law would also restrict police from multiple blows to the same area of the body.

Other reforms include involving "citizen police" when necessary to help out in detaining or arresting an alleged criminal. Ordinary citizens have not in the past been used in Russia for this; whereas in the United States citizen arrests are generally accepted. The change in Russian law would envisage that upon the request of a policeman, a regular citizen may be called on to assist in detaining a lawbreaker.

A special committee and the Interior Ministry's expert council will analyze the comments on the website, Medvedev said last week. He also said that public discussions of the revised police law would continue until mid-September, giving plenty of time for the people to voice their opinions.

The new police reform would also prohibit people from entering the police forces if they are alcoholics, drug addicts, or have a past criminal record.