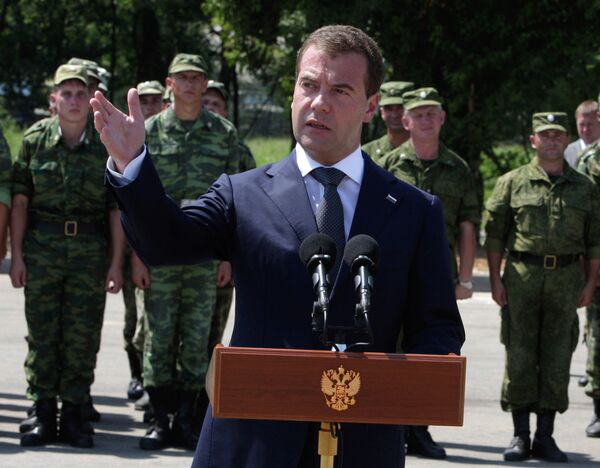 President Dmitry Medvedev chatted with Russian soldiers at a military base in Abkhazia, vowing that troops' living conditions would be improved.

President Dmitry Medvedev chatted with Russian soldiers on Sunday at a military base in Abkhazia, vowing that troops' living conditions would be improved.

The former Soviet military base on the Black Sea coast north of Abkhazia's capital has been undergoing reconstruction following a February deal between Moscow and Sukhumi making Russia's presence there permanent.

Russia had maintained a 1,700-strong force in Abkhazia with its headquarters in Gudauta under a September 2009 agreement on military cooperation.

Medvedev, on his first visit to Abkhazia, told servicemen that the construction of new barracks, homes and dormitories was being completed and would make their service in the former Georgian republic more comfortable.

"By mid-September we will introduce the new barracks, where the conditions will be fine," he said as he talked with soldiers over lunch.

"The houses are going up fast enough, they will provide air-conditioners and have all the amenities," he said, joking with the troops about the heat.

"It's hot, but what can you do, you put up with it. But it's better here than it is in Moscow. It may be hot but there is no smoke or fumes."

The president recalled that two years ago the Georgian side sparked a bloody conflict with Russia when it attacked South Ossetia, killing several Russian peacekeepers who were stationed there.

Moscow recognized South Ossetia and Abkhazia as independent in August 2008 and has since been the guarantor of their security. Medvedev praised the soldiers for their efforts, noting that the two years had been difficult, but peaceful life had been established in the republics.

"During this time, those who serve here and in South Ossetia have been well-schooled. But most importantly - all of you today and your predecessors have simply defended peaceful life and helped ordinary citizens," Medvedev said.

At the end of the visit, Medvedev reminded the soldiers about their main task.

"Your mission remains the same - you must make sure no one sticks his nose in here," he said.

Neighbors "must accept Abkhazia's independence, and our treaties with her, but then our former partners sometimes forget how to behave," he added.

On the second anniversary of Georgia's attack on South Ossetia, President Mikheil Saakashvili urged Georgians to "liberate" their country.

"Our historic mission is to carry out until the end the struggle for the liberation of Georgia," Saakashvili said in an address aired on Saturday across the country.

Two weeks after the end of the five-day war, Russia recognized both South Ossetia and Abkhazia as independent. So far, only Venezuela, Nicaragua and the tiny Pacific island nation of Nauru have followed suit.