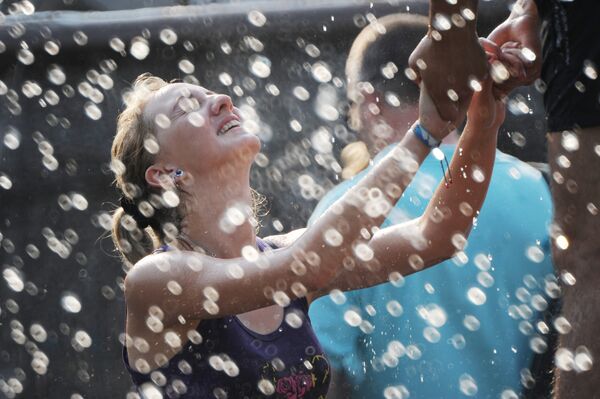 © RIA Novosti . Vladimir Vyatkin
/
Go to the mediabank
Subscribe
International
India
Africa
Temperatures in Moscow are forecast to hit 40 degrees Celsius (104 degrees Fahrenheit) on Friday as the heat wave in Russia continues and heavy smog returns to the capital.

Temperatures in Moscow are forecast to hit 40 degrees Celsius (104 degrees Fahrenheit) on Friday as the heat wave in Russia continues and heavy smog returns to the capital.

Meteonovosti website said storms are also possible in Moscow, which had some thunder and lightning overnight but little rain.

Thick and toxic smog, smoke from nearby raging peat bog and forest fires mixed with exhaust fumes and other pollutants, which had slightly cleared on Thursday, returned on Friday, covering the city and prompting many residents to wear masks when outdoors.

The heat wave, which looks set to last for at least another week, and the accompanying smog has given rise to talk of an apocalyptic nature, with a leading psychiatrist claiming some 10% of Russians believe the latest events indicate doomsday is not far off.

Health experts say pollution levels are so high that breathing has become as dangerous as smoking several packets of cigarettes a day.

Meteorologists said earlier this week temperatures in areas around Moscow may reach 42 degrees Celsius (108 degrees Fahrenheit) by the weekend.

A scorching heat wave has gripped much of western Russia since mid-June, sparking wildfires and causing the worst drought in decades.

The abnormal heat and resulting wildfires - which have so far killed 50 people and left some 2,000 homeless across the central part of European Russia - have also seen speculation that the country may have come under attack by new sophisticated climate weapons.

The record-breaking heat wave in Moscow will continue through mid-August, meteorologists say.