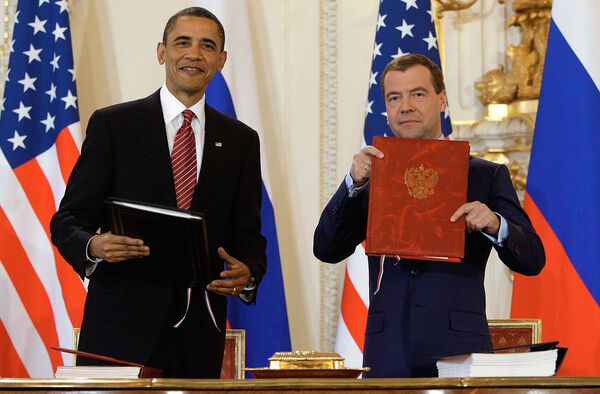 The ratification of a new strategic arms reduction (START) treaty with Russia is a top priority of the Barack Obama's administration.

The ratification of a new strategic arms reduction (START) treaty with Russia is a top priority of the Barack Obama's administration, a senior State Department official said.

The U.S. administration hopes to win approval for new START treaty before the Senate begins its summer break in August. To do that would require the support of the necessary two-thirds majority in the 100-member Senate.

"Clearly our priority now is to have new START treaty ratified by U.S. Senate," Ellen Tauscher, Under Secretary for Arms Control and International Security, said on Thursday in the new Conversations with America on-line video series recently launched by the U.S. Department of State.

Tauscher discussed the importance of the treaty for global security and repeatedly stressed the fact that "every [U.S.] president since Richard Nixon has said that "I'd rather have a treaty than not."

However, the Republicans in the Senate may force the vote on the treaty to be postponed until after the congressional elections in November to strengthen their opposition to the ratification of the document.

The new START treaty was signed on April 8 in Prague, replacing the START 1 treaty that expired in December 2009. The Russian and U.S. presidents have agreed that the ratification processes should be simultaneous.

The new pact stipulates that the number of nuclear warheads is to be reduced to 1,550 on each side, while the number of deployed and non-deployed delivery vehicles must not exceed 800 on either side.

Some Conservatives claim that U.S. negotiators made too many concessions and that the treaty does not establish adequate verification measures. They also fear that Russia could use the treaty to limit U.S. missile defense plans.

Tauscher reiterated on Thursday that the new START treaty did not involve limitations on the development of U.S. missile defenses and said the Obama administration had not given up on its European missile shield initiative.