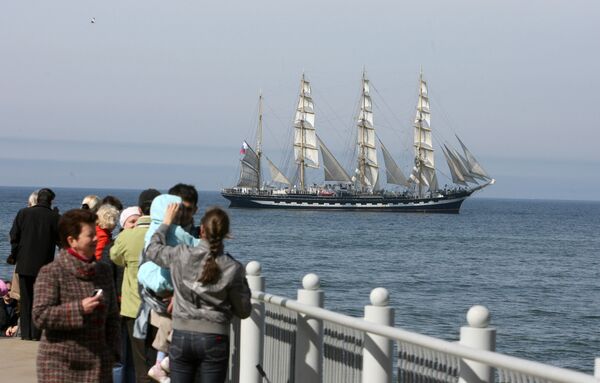 Russia's Kruzenshtern sailing ship will start on Friday a four-day visit to Stockholm as part of a current training mission.

Russia's Kruzenshtern sailing ship will start on Friday a four-day visit to Stockholm as part of a current training mission, said an official from the Baltic State Fishing Fleet Academy, which operates the vessel.

Kruzenshtern's three-month training tour includes visits to foreign ports and participation in several international regattas. The ship has a crew and 120 cadets on board.

"Our ship will make a port call in Stockholm on Friday. After a tense competition in the Tall Ships Races from Antwerp to Aalborg, the crew and cadets will have a four-day rest in the capital of Sweden," the official told reporters on Thursday.

The famed four-masted sailing ship will be open to public during its stay at the Stockholm port.

The next stop on the ship's itinerary will be the German port of Rostock on August 5, the official said.

The Kruzenshtern is widely regarded as one of the jewels of the Russian sailing fleet. It was built in Germany in 1926 as a windjammer class ship (then called The Padova).

After World War II, the ship was transferred to the Soviet Union as a reparation payment and renamed after a legendary Russian navigator Johann Kruzenshtern (1770-1846), who performed Russia's first round-the-world trip.

Since the 1970s, the ship has been used as a training vessel for naval cadets.

The Kruzenshtern was moored for three weeks in Vancouver during the 2010 Winter Olympics and became one of the most important symbols of support for the Russian team in its ultimately unsuccessful campaign.