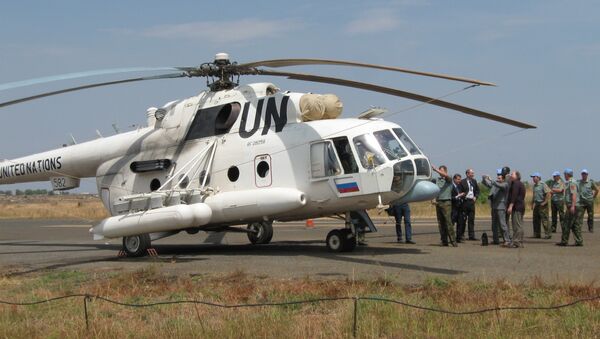 The missing pilot, who disappeared after a Russian helicopter was hijacked in Dafur, has been freed, a senior Russian lawmaker said on Thursday.

The missing pilot, who disappeared after a Russian helicopter was hijacked in Dafur, has been freed, a senior Russian lawmaker said on Thursday.

"The pilot has already been taken to the UN mission," Mikhail Margelov said.

The helicopter, carrying four crewmembers and five passengers, was seized by insurgents on Monday, according to the Russian Foreign Ministry.

The remaining three crewmembers and all five passengers on board were confirmed safe shortly after the siege.

"Our people, including the Russian embassy, were working 24/7 to secure the release of the pilot," Margelov said.

He said a group of militants serving the interests of Sudanese paramilitary forces, were behind his abduction.

"Our position is simple; none of the sides fighting in Darfur may use Russian pilots as bargaining chips," he said.

The helicopter, working in Sudan under a UN contract, was on a joint UN and African Union peacekeeping mission in Darfur.

The civil war that broke out in the western region of Darfur in early 2003 has claimed the lives of more than 300,000, according to United Nations estimates, and forced 2.7 million people from their homes. The Sudanese side puts the number of dead at 10,000.

Several Sudanese rebel groups have recently signed peace accords with the government in Khartoum but a key rebel group, the Sudan Liberation Army, has so far rejected negotiations with Khartoum and fought fierce clashes with the Sudanese Army in March.

Russia has been maintaining a peacekeeping contingent in the war-torn country since April 2006 as part of the United Nations Mission in Sudan (UNMIS).