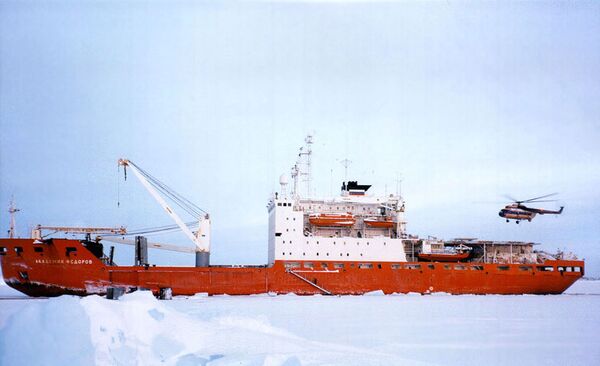 The Russian research vessel Akademik Fedorov will leave Arkhangelsk for a three-month expedition to the Arctic on Wednesday to ascertain the borders of Russia's continental shelf, the expedition's chief said on Tuesday.

The Russian research vessel Akademik Fedorov will leave Arkhangelsk for a three-month expedition to the Arctic on Wednesday to ascertain the borders of Russia's continental shelf, the expedition's chief said on Tuesday.

If Russia proves that the Lomonosov Ridge and the Mendeleev Ridge are the extension of the Russian continental shelf, the country will receive the right to the additional 1.2 million square kilometers in the Arctic and to the development of huge oil and gas fields in the triangle between the Chukotka Peninsula, Murmansk and the North Pole. The adjusted Russian claim for the Arctic shelf is expected to be prepared by 2013.

"The main purpose [of the expedition] is depth measuring and seismological survey. The experts of the Arctic and Antarctic Research Institute will take care of moving the vessel and making the atmosphere and oceanographic observations", Sokolov said.

According to him, the Yamal nuclear icebreaker will accompany the Akademik Fedorov in the Arctic. The vessels will meet in the Barents Sea near the Vilkitsky Strait, Sokolov said.

The expedition will last from 70 to 90 days.

Russia has undertaken two Arctic expeditions - to the Mendeleyev underwater chain in 2005 and to the Lomonosov Ridge in the summer of 2007 - to substantiate its territorial claims in the region.

The vast hydrocarbon deposits that will become more accessible as rising global temperatures lead to a reduction in sea ice have brought the Arctic to the center of geopolitical wrangling between the United States, Russia, Canada, Norway, and Denmark.