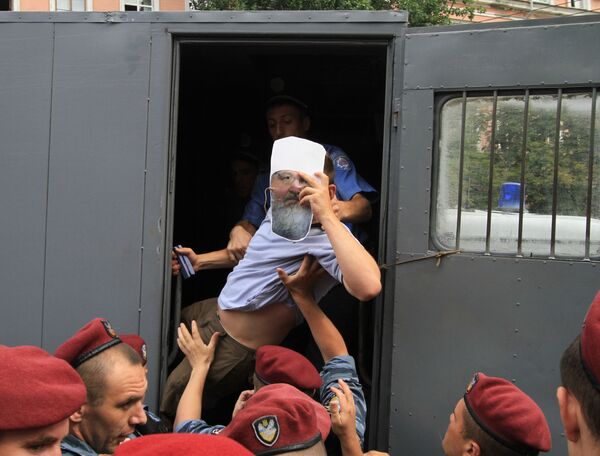 Police in Kiev detained eight Ukrainian ultranationalists who took part in an unauthorized rally on Monday to protest a visit to the city by the head of the Russian Orthodox Church.

Police in Kiev detained eight Ukrainian ultranationalists who took part in an unauthorized rally on Monday to protest a visit to the city by the head of the Russian Orthodox Church.

Patriarch Kirill of Moscow and All Russia arrived in Ukraine on a pastor's visit on July 20. He has already visited the cities of Odessa and Dnepropetrovsk, and will be in Kiev until July 28.

Kiev's district administrative court banned the ultranationalist Svoboda (Freedom) party from holding a protest rally in front of the St. Sophia Cathedral, where Patriarch Kirill was holding a prayer service on Monday, but several dozen members of the party defied the ban.

The canonical Orthodox Church in Ukraine is subordinate to the Russian Orthodox Church's Moscow Patriarchate, but Ukrainian nationalists want an independent national church.

In the St. Sophia Cathedral, Patriarch Kirill called on worshipers to pray for the split in the church to be overcome.

"Sometimes we hear that there are strategies, human plans for healing rifts. But the Church has one strategy: the strategy of prayer," he said.

When the patriarch was leaving the cathedral, nationalists shouted: "Away with Moscow's priest."

During his visit to Ukraine last summer, Kirill also spoke of restoring a united Orthodox Church in Ukraine, although the task seemed less likely under western-leaning President Viktor Yushchenko.

The Russian Church hopes that under current President Viktor Yanukovych, who is keen to improve relations with Russia and supports the Moscow Patriarchate, the split may be overcome.