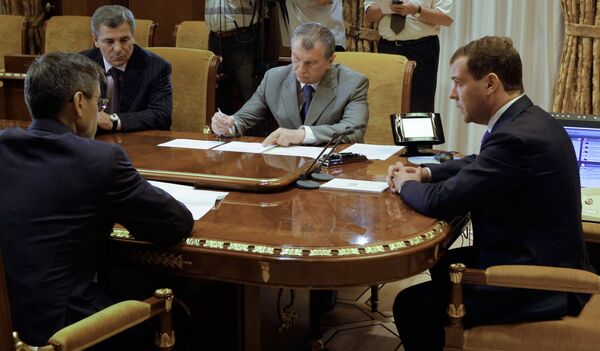 Security officials and energy company chiefs will be fired if there are more incidents like Wednesday's bombing of a hydropower plant in Russia's North Caucasus, President Dmitry Medvedev warned on Thursday.

Security officials and energy company chiefs will be fired if there are more incidents like Wednesday's bombing of a hydropower plant in Russia's North Caucasus, President Dmitry Medvedev warned on Thursday.

A group of at least six gunmen set off five bombs with an estimated total of up to 3 kg of TNT at the Baksan Hydropower Plant in the North Caucasus republic of Kabardino-Balkaria, killing two police officers. The blaze from the blast covered an area of 250 square meters.

"Law enforcement and security agencies and [energy] companies, as well as the government, must do all they can to make sure that such things do not happen again," Medvedev said.

"If they do, none of the law enforcement, security and energy company chiefs will keep their jobs. All of them will be sacked."

He gave Deputy Prime Minister Igor Sechin, who oversees the country's fuel and energy sector, one month to develop a unified control system to ensure the safety of all energy facilities in the North Caucasus.

He also ordered that repairs at the Baksan plant be completed as soon as possible.

Renovation work was earlier scheduled to start in 2014. The plant, which was built in 1939, meets about 20% of the republic's electricity need.

Russian Interior Minister Rashid Nurgaliyev blamed the attack on lax security arrangements at the plant, saying two of the police officers were asleep at the time of the attack - one in his car and the other in a service room. They were killed instantly in their sleep.

He also said the gunmen had no problem penetrating the plant because it did not have closed circuit television cameras.

Plant head Ali Sattaev said two power units had been damaged as a result of the blasts. However, a RusHydro spokesman said energy supplies to Kabardino-Balkaria would not be affected.

Some experts say the raid on the plant was a "rehearsal" that could be followed by other attacks on infrastructure facilities.