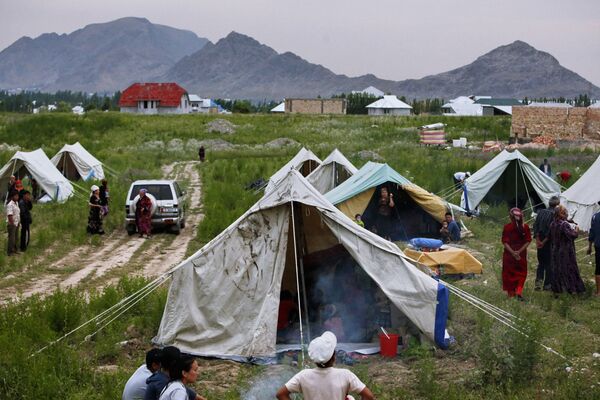 An international commission will in August start an investigation into the recent riots in southern Kyrgyzstan, an Organization for Security and Cooperation in Europe (OSCE) special representative said on Thursday.

An international commission will in August start an investigation into the recent riots in southern Kyrgyzstan, an Organization for Security and Cooperation in Europe (OSCE) special representative said on Thursday.

"We have already started work on forming a commission so that the international investigation can begin in August," the OSCE Parliamentary Assembly's Special Representative for Central Asia Kimmo Kiljunen said.

Violent clashes broke out in the south of Kyrgyzstan in mid-June between minority Uzbeks and ethnic Kyrgyz. The official death toll is around 300 but locals say it as many as 2,000 people could have been killed. Over 100,000 refugees fled to neighboring Uzbekistan and hundreds of houses were destroyed.

"We will draw up a number of recommendations outlining what should be done to avoid a re-occurrence of such events," he added, adding that representatives from the OSCE, the EU and the United Nations will be involved.

Kiljunen said that the Commonwealth of Independent Sates [CIS] has also agreed to participate in the investigation.

"This concerns other organizations too. We will look into the methods of such cooperation," Kiljunen said in answer to a question about the possibility of including experts from the Collective Security Treaty Organization (CSTO) and the Shanghai Cooperation Organization (SCO) in the investigation.

He said he hoped funding would come from the governments of a number of countries and a separate fund would be set up for witness protection.

The OSCE has agreed to deploy a Police Advisory Group in Kyrgyzstan to help reduce inter-ethnic tensions and strengthen local police forces, a statement published on the OSCE website said.