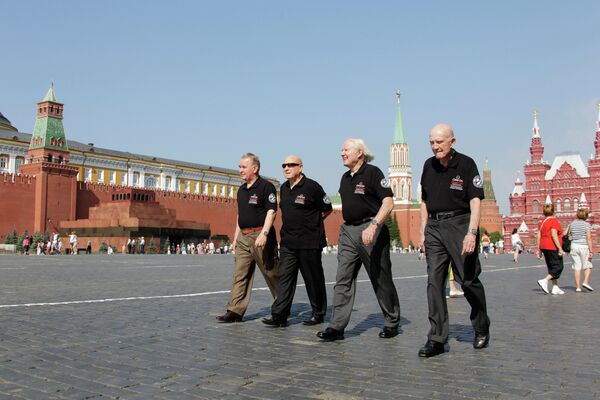 Legendary Soviet cosmonauts Valery Kubasov, Alexei Leonov, and U.S. astronauts Thomas Stafford and Vance Brand shared their impressions of the historic docking of the Apollo-Soyuz Test Project mission 35 years ago during a video linkup with RIA Novosti in Moscow on Wednesday.

The docking of the Soviet and U.S. spacecraft was the first joint space manned mission between the two super powers. The spacecraft from both countries remained docked together for six days.

The spacecraft docked on July 17, 1975, 140 miles above the Atlantic Ocean. Three hours after docking, Leonov shook hands with Stafford and said in English "Glad to see you." Stafford replied in Russian "Privyet, rad tebya videt" ("Hello, glad to see you.") The men then embraced.

The main goals of the Apollo-Soyuz Test Project were to create an advanced multirole rescue pod, improve technical systems and methods for joint mission control, and conduct joint scientific experiments and orbital rescue operations. The docking module was designed by Soviet and U.S. specialists, who also developed new approach-and-docking radar systems. The United States developed an airlock that allowed safe passage between the spacecraft. The Soviets invented new non-flammable underwear and flight-suit fabrics.

Stafford, 79, said the astronauts were afraid the project might not have occurred since a docking in space had never been done before. "I wanted to be sure that the docking was perfect...control the spacecraft precisely," he said.

Stafford also mentioned his two sons, Misha and Stas, who were adopted in Russia and brought to the United States by his Soviet colleague, Leonov. Stafford said that Misha might very well become a pilot.

Leonov, 76, told the press conference participants he first became acquainted with Stafford even before the Apollo-Soyuz mission was set up.

"When our doubling crew perished (Dobrovolsky, Volkov and Patzaev) in 1971 at the time of Cold War, Tom Stafford regardless of [resistance from Soviet authorities] came to our country for the funeral," Leonov said.

"The commander of the [Soviet] Air Force asked me to take care of Tom Stafford, but I objected saying that I didn't know the language. He replied that we were both pilots and would understand each other. That's the way I met Tom Stafford long before the Soyuz-Apollo mission," he said.

"From a technical viewpoint, our space programs were like two trees with completely different roots, so we had to merge these two different types of technologies," he said, adding: "And it was successfully done."

Brand added that he had seen the Soyuz some 600 kilometers away before the two spacecraft docked.

Both U.S. astronauts noted that Russia's younger generation is more aware of the historic Apollo-Soyuz mission than young Americans, however said the symbol is quite significant for both Americans and Russians.

Both crews returned safely to Earth after the mission. Soyuz 19 soft-landed on Soviet soil on July 21, 1975, while Apollo 18 splashed down near the Hawaiian Islands on July 25.