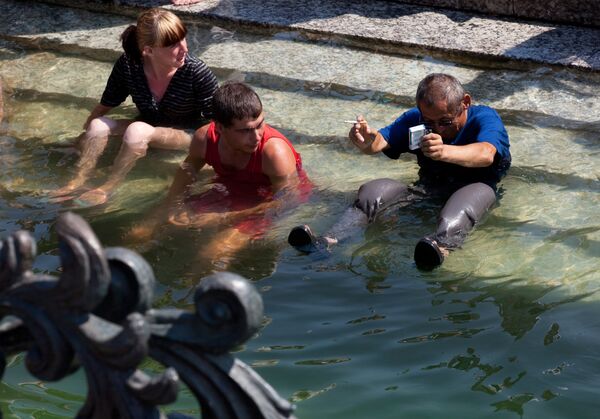 A blistering heat wave in Russia has been caused by man-made global warming, WWF Russia and Greenpeace Russia said on Wednesday.

A blistering heat wave in Russia has been caused by man-made global warming, WWF Russia and Greenpeace Russia said on Wednesday.

For the past four weeks temperatures across western Russia have topped 35 degrees Celsius (95 degrees Fahrenheit), killing scores of people and creating what is thought to be the worst drought since 1972.

Many farmers are on the brink of bankruptcy, while a state of emergency has been declared in 17 Russian regions. Nearly 10 million hectares of crops have been destroyed by drought.

"Such long periods of summer drought have been registered before, for instance, in 1936, but over the past few years they have become more frequent," Alexei Kokorin, the head of WWF Russia's climate program, told RIA Novosti.

"This is a reaction of the climate system to man-made changes in atmospheric chemistry," he said.

Vladimir Chuprov, the head of Greenpeace Russia's energy department, said "the Russian government will have to take action one way or another to combat the consequences of climate change."

With a request of 40 billion rubles ($1.3 billion) in aid for stricken regions from the Russian Grain Union and an inevitable rise in food prices, the government has a tough job to do.

In March, in the wake of the much-criticized 2009 Copenhagen Summit, Russian President Dmitry Medvedev called for tougher environmental restrictions, ordering the government to act on the national climate doctrine approved during last year's summit.