Finland ready to cooperate with Russia on child protection issues 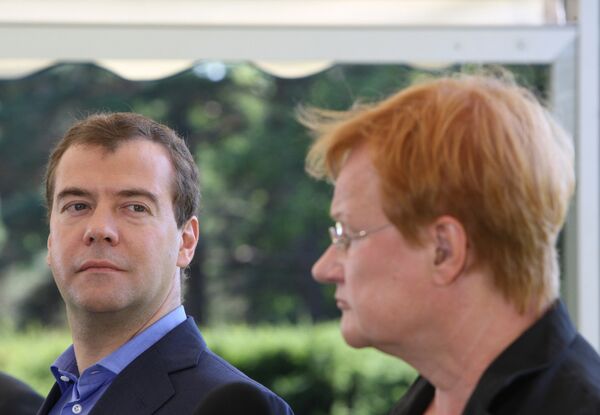 © RIA Novosti . Mikhail Klimentiev
/
Go to the photo bank
Subscribe
Finland is ready to cooperate with Russia on child protection issues but sees no need to set up bilateral structures on the issue, Finnish President Tarja Halonen said on Wednesday.

Finland is ready to cooperate with Russia on child protection issues but sees no need to set up bilateral structures on the issue, Finnish President Tarja Halonen said on Wednesday.

A number of high-profile scandals concerning children from mixed families in Finland have been brought to the public eye since a law came into effect in 2008 giving the authorities the right to remove children from their homes if they are thought to be in danger before legal proceedings have begun.

In February, 7-year old Robert Rantala from a Russian-Finnish family was sent to an orphanage in the Finnish city of Turku after he told his classmates his mother had slapped him and he might return to Russia. Local authorities filed a lawsuit to deprive Robert's father and mother of their parental rights.

Halonen said she does not believe there is a problem of discrimination against Russians in Finland.

"It is very important that government authorities in Finland and in Russia treat mixed families as equals, without any discrimination," Halonen said at a press-conference following talks with Russian President Dmitry Medvedev, who arrived on a two-day visit to Finland in the city of Turku on Tuesday.

The Russian side said issues surrounding children from mixed families should be treated with special delicacy.

"Such disputes are normally resolved in accordance with domestic family law, but when it comes to mixed families...these topics are always of high interest, and have a special resonance in other states, which is impossible to ignore," Medvedev said.

"Our authorities are ready to do everything we can at a high level to further strengthen cooperation between the authorities and non-governmental organizations to increase trust between the populations of all countries," Halonen said.

Last week Finland refused to sign an agreement with Russia on family and civil cases.

"We do not propose the creation of any new organizations but are ready to support the further strengthening of this cooperation," Halonen said.

She said that the problem is being considered within the EU and partially within the Council of Europe.

"Finland has already signed and ratified The Hague's conventions on children," she said, adding that a number of countries in the EU had started an initiative to sign bilateral agreements on the issue.

Russia's ombudsman for children's rights, Pavel Astakhov, said the cases involving Russian children in Finnish-Russian families should be subject to the UN convention on human rights, as "both Russia and Finland are signatories."