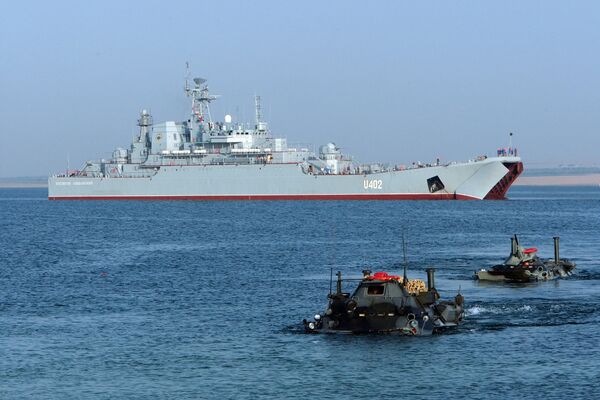 Fifteen Ukrainian, U.S. and Turkish warships sailed out of Ukraine's Black Sea port of Odessa on Sunday to begin the active phase of the Sea Breeze 2010 exercises.

Fifteen Ukrainian, U.S. and Turkish warships sailed out of Ukraine's Black Sea port of Odessa on Sunday to begin the active phase of the Sea Breeze 2010 exercises, the Ukrainian UNIAN news agency reported.

The military drills, focused on the planning and conduct of international anti-piracy operations, began in southern Ukraine on July 12 and will run until Friday.

The multinational headquarters is staffed by Ukrainian, U.S., Georgian and Moldovan officers and representatives of Azerbaijan, Belgium, Germany, Greece, Denmark, Moldova, Poland, Sweden and Austria are also at the exercises.

A statement by the headquarters said two Be-12 and one An-26 aircraft and an Mi-14 helicopter from the Ukrainian Navy's aviation arm would also take part in Sunday's drills, carrying out search, rescue and evacuation missions and providing air support for the ships.

The Sea Breeze exercises have been running since 1997 with the participation of military units from NATO and its Partnership for Peace countries, which include Ukraine and Georgia.

In previous years the exercises drew protests by political groups, including the Ukrainian Communist Party and the Progressive Socialist Party of Ukraine, and residents of Crimea, Odessa and other southern regions opposed to closer Ukrainian ties with NATO.

The exercises did not take place in 2006 or 2009, in the latter case when Ukraine's parliament refused to grant permission for the deployment of foreign troops in the country.

This year, however, the preparations went smoothly and the Communists, part of the coalition government with the Party of Regions of Ukraine's new pro-Russian president, Viktor Yanukovych, vowed they would not hinder the exercises.

The Progressive Socialist Party attempted to protest against the drills on Kiev's Independence Square on July 9, but police broke up the rally, with several activists detained but quickly released.