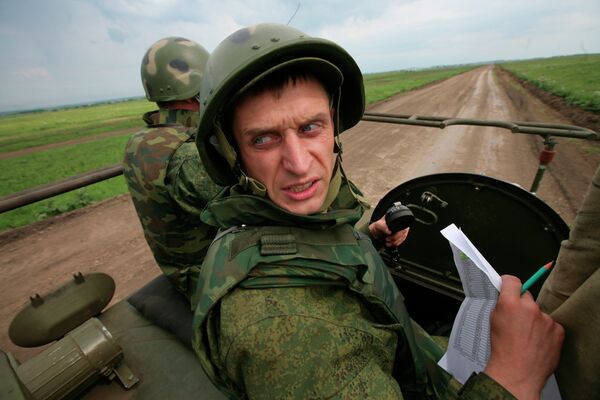 The expected changes in the command structure of the Russian Armed Forces have become reality. Yesterday President Dmitry Medvedev signed a decree establishing four unified strategic commands to be based in four new military districts.

Command West, with headquarters in Moscow, will control all military personnel and hardware in the Western Military District. The new district will incorporate the former Moscow and Leningrad military districts and the Baltic and Northern Fleets.

The leadership of the new commands will be in charge of all forces - including naval, air force and air defense - deployed on the territory of the respective military districts. Unified headquarters will be established to command these forces.

The system of military districts, which has existed for almost 150 years, was based on different principles. The commander of a military district was responsible for the land force units on his territory. He had no authority over other branches of the armed forces, except for front-line aviation, which was periodically subordinated to the commanders of military districts during the course of experiments with new command structures.

Command structures (except in the Navy) were unified at the operational level only during times of war, when commanders on the front were in charge of all forces operating on the front, regardless of the branch. This did not apply to some special units and long-distance bombers that answered directly to the General Headquarters of the Supreme Command. Cooperation with the Navy was maintained by transferring naval units to the command of maritime fronts (or fronts located near big rivers and lakes with flotillas). Cooperation was sometimes ordered higher up in the chain of command.

During the post-war period, the capabilities of air forces and navies in operations against the shore were vastly expanded and new command systems made it possible to coordinate the efforts of various branches of the armed forces. As a result, unified commands became a standard feature of militaries in the West, and now Russia has finally adopted the practice.

The new districts are divided up geographically to reflect the most likely movements of the armed forces in the event of a conflict. The Western Military District includes the units that would have been mobilized for action in the European theater and nearby waters: the Moscow and Leningrad military districts and the Northern and Baltic Fleets. The Southern Military District is responsible for the Caucasus, the Black and Caspian Seas, the Mediterranean and the western part of the Indian Ocean. The Central Military District can be thought of as the Central Asian district. Its potential zone of responsibility covers all of Central Asia, stretching from Kazakhstan to the Hindu Kush. Finally, the Eastern Military District is in charge of Russia's eastern border, as well as the Asia-Pacific region.

The new commands will control troops both in Russia and beyond. Each command will have its own zone of responsibility abroad, and the headquarters of the Unified Strategic Command will have authority over all military forces.

Only strategic missile force, which is directly and exclusively controlled by the supreme commander, will retain an independent system of command and control.

In tandem with establishing unified commands, Russia has also created a new integrated structure for material and technical support of the armed forces, incorporating the logistics service and the armaments service. It will be responsible both for providing food, fuel and other supplies, and also weapons and ammunition. Until now, these functions were divided among various services and departments. The deputy defense minister for armaments will now deal solely with the production and adoption of new types of armaments and other materiel.

Establishing multi-service commands in place of military districts is a long overdue reform. However, the implementation of the reform is raising many questions. First, is Russia's officer corps prepared to command formations consisting of different armed services? Second, will these formations be capable of responding to diverse threats arising in vast zones of responsibility in Russia and abroad? The latter question is particularly relevant when it comes to commanding fleets in remote theaters, such as the Indian Ocean, the Mediterranean Sea and other strategically important regions.

Naval officers must play a much larger role in multi-service commands if they are to be effective. Otherwise, the Navy will cease to be an independent branch of the military and will become the army's marine division, making it impossible for the Navy to carry out most of its missions.

There are even bigger questions about the extent to which the troops and headquarters are properly equipped. The reform will not produce the desired effect if it is not backed up by technical modernization. Improper equipment will greatly limit the ability to command troops, which is far from ideal even now.

It will also take time to train the officers to command multi-service formations. Years will pass before the new structure will become fully functional, and these years will be some of the hardest for the Russian Armed Forces.

Nor is there any chance of rearming the armed forces quickly. Armament that has been obsolete for 20-30 years is hindering efforts to create an effective combat mechanism. Hopefully, the new federal armament program for 2011-2020 will improve the situation, provided it is implemented with greater skill than its predecessors.