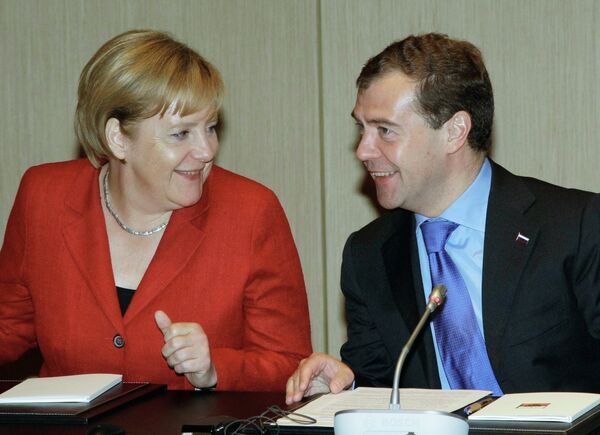 German Chancellor Angela Merkel said on Thursday she hoped the recently formed Customs Union between Russian, Kazakhstan and Belarus will not hamper Russia's accession to the World Trade Organization (WTO).

German Chancellor Angela Merkel said on Thursday she hoped the recently formed Customs Union between Russian, Kazakhstan and Belarus will not hamper Russia's accession to the World Trade Organization (WTO).

Russian President Dmitry Medvedev and Angela Merkel arrived in the Urals city of Yekaterinburg on Wednesday for the Russian-German interstate consultations.

"We want Russia's accession to the WTO to be completed and hope the Customs Union will not make the situation more complicated. We want to see transparent investment conditions," Merkel said.

Medvedev said that Russia is making progress towards WTO accession and has held talks with the United States on the issue.

"Our entry into the Customs Union has not halted our efforts towards WTO membership," he said. "I think that this year we will make significant progress in this direction."

Russia has been in negotiations for WTO membership for 17 years and is the only major economy outside of the global trade body.

Russian President Dmitry Medvedev said on Tuesday he hopes that Russia will complete negotiations on its accession by yearend.

Medvedev and Merkel are also expected to discuss bilateral trade, economic, cultural and humanitarian ties, as well as international affairs.

A total of 10 bilateral documents are expected to be signed, including a memorandum of understanding between the Skolkovo foundation, which supervises the eponymous innovation hub outside of Moscow, and Germany's Siemens AG.

Russian railway monopoly RZD will also sign a memorandum with Siemens AG to establish a joint venture for the supply and maintenance of high-speed trains.