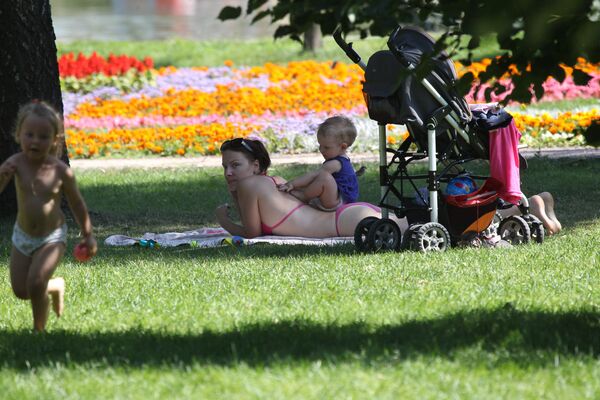 © RIA Novosti . Vladimir Fedorenko
/
Go to the photo bank
Subscribe
"We must stop any attempt to capitalize on this disaster, this drought," Russian Prime Minister Vladimir Putin said at a government meeting on Monday.

"We must stop any attempt to capitalize on this disaster, this drought," Russian Prime Minister Vladimir Putin said at a government meeting on Monday.

Over three weeks ago Russia was hit by an Africa-like heat wave, which has since broken all records and turned into a real disaster. Temperatures are expected to rise even further in the next few days, reaching between 37 and 39 degrees Celsius in the Ryazan, Tambov, Lipetsk, Kursk, Belgorod and Voronezh regions. Temperatures in other regions in central Russia will be only a few degrees cooler, while areas around the Volga will continue to suffer from scorching, 40-degree heat.

Gennady Onishchenko, chief medical officer at the Russian Federal Service for Supervision of Consumer Protection and Welfare, has encouraged Russians in the afflicted regions to take a siesta in the afternoon. "Due to the heat, strenuous activity should be limited to earlier and later in the day, and longer breaks are essential during peak temperatures with the highest sun exposure," Onishchenko advised employers.

The situation is verging on apocalyptic. Many people with heart problems and diabetes have been forced to see doctors, while children are suffering from heat stroke and sunburn. Medical rescue squads are working in overdrive, and psychologists say there has been an increase in aggressive behavior, as well as additional cases of depression. Local pharmacies are selling more sedatives and cardiovascular medications, the sale of which has increased by 8% to 10%, according to some estimates.

The heat is softening asphalt on the roads, which has lead to more traffic accidents. Traffic police have been instructed to administer first aid to drivers affected by heat stroke and help repair cars with overheated engines.

Forests and peat bogs are burning. A state of emergency has been declared in 35 districts of the Orenburg Region. Rural wells are also quickly drying up. The Samara Region and other areas are facing shortages of drinking water.

Smog hangs in the air, which means that oxygen levels are 1.5 times lower than usual. People are fainting because of the stifling air in overcrowded mass transit systems. Moreover, hypertension and obesity can lead to major health problems because of the heat. Heat increases perspiration, and the blood thickens, which leads to blood clots. Blocked arteries near the heart and brain can cause cardiac arrests and strokes.

Burnt by the sun, people are seeking out lakes, rivers, swimming pools and fountains for relief. But these bodies of water also pose risks. Swimming in a fountain like actress Anita Ekberg in Federico Fellini's La Dolce Vita is now dangerous. E. coli bacteria and malaria-carrying mosquito larvae have multiplied in ponds and fountains, which is hardly surprising since current temperatures are six to seven degrees higher than average. Russia has not experienced such heat in 130 years.

Onishchenko also advises Russians to avoid misusing air conditioners, because abrupt changes in temperature may cause health problems. Nevertheless, companies manufacturing air conditioners are reaping tremendous profits: commercial surveys indicate that air conditioners in one third of local offices are unable to cope with the heat wave. The obvious solution: buy a new system. But air conditioning is not a panacea, and Russian cooling systems are far from the most advanced in the world.

Some Muscovites are trying to escape the heat in indoor ice rinks, which are receiving far more visitors than usual. On July 10, the Russky Lyod (Russian Ice) indoor ice rink opened in Moscow's famous Gorky Central Park of Culture and Leisure.

Ice cream and soft drink vendors have seen their sales increase by 300% to 400% this July, and the heat has also increased sales of substandard products. Nevertheless, despite all warnings, people continue to buy kvass (bread drink) from large barrels, although these drinks go bad much faster if stored improperly. And few shops are willing to change their storage techniques to adjust to the current, Africa-like heat.

A state of emergency has been declared in 14 Russian regions, where winter and spring crops are withering under the heat. Russia harvested 97 million metric tons of grain in 2009, and although the Ministry of Agriculture predicted similar harvests for 2010, the actual numbers will be significantly lower. Mordovia, Tatarstan and parts of the Orenburg, Saratov, Sverdlovsk, Kurgan, Ulyanovsk and Chelyabinsk regions are the hardest hit.

Arkady Zlochevsky, the president of the Russian Grain Union, said at a RIA Novosti news conference that the drought has destroyed nine million out of the 48 million hectares of land that had been planted. "The situation is quite bad, because farmers in affected regions have suffered considerable losses and are unable to repay their substantial debts," Zlochevsky said.

In response to this problem, Russian Prime Minister Vladimir Putin promised "We will be able to provide subsidies for affected farms." However, the subsidies will be primarily channeled to those regions that had prioritized crop insurance programs.

The World Wildlife Fund says the current record-breaking heat in Russia is another confirmation of the theory of global warming. Many environmentalists warn that we should expect additional weather aberrations and more calamities in the future.

Although current Russian temperatures have overtaken those in Turkey and Egypt, weather forecasters have predicted that temperatures will fall to 28 degrees over the weekend, after a cool front passes through Moscow, bringing intermittent rain.