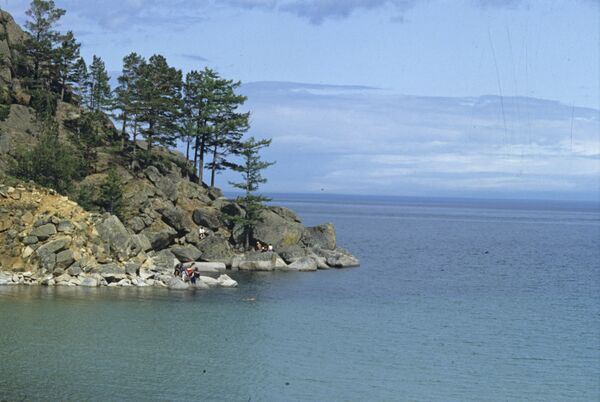 If one was to set about the rather barmy task of pinpointing the geographical origins of the Russian soul—some kind of locus point emitting Russianness and uniting its people—then a good place to start might well be the heart of Siberia, at the bottom of the world’s largest freshwater lake.

Lake Baikal Is a Springhead of the Russian Soul

RussiaProfile.Org, an online publication providing in-depth analysis of business, politics, current affairs and culture in Russia, has published an unusual Special Report on the mysterious "Russian soul". Fifteen articles by both Russian and foreign contributors examine this concept, which has been used by Russia watchers for some 150 years, from a contemporary perspective. The following article is part of this collection.

If one was to set about the rather barmy task of pinpointing the geographical origins of the Russian soul—some kind of locus point emitting Russianness and uniting its people—then a good place to start might well be the heart of Siberia, at the bottom of the world’s largest freshwater lake.

Lake Baikal, also known as the “Pearl of Siberia” and the “Sacred Sea,” stirs a basic passion in Russians. Apparently first reached by Russian explorer Kurbat Ivanov relatively late, in 1643, the UNESCO-protected lake has now long since forged its very own place in Russian folklore and literature. Over a hundred years ago Anton Chekhov wrote: “The water is unusually transparent, so that you can see through it as through air…They say that at the deepest places you can see the bottom; I myself got goose bumps when I saw such height as cliffs and mountains drowned in blue fog. The trip to Baikal was marvelous and I could not forget it in all of eternity.”

But the lake has not always been treated with the same reverence by the authorities. With its pristine waters, which are home to unique flora and fauna, Lake Baikal is perfect for pulp and paper production, a lucrative but highly polluting process. In 1966 the now-notorious Baikalsk Pulp and Paper Mill began to function on the shores of Baikal.

An introduction to Soviet Man’s disastrous experience with making tweaks to nature here and there need go no further than the example of the Aral Sea in Uzbekistan, which has shrunk by 70 percent in the last five decades, ever since scientists reversed the direction of its feeder rivers. Environmentalists say that effluence from the Baikalsk Pulp and Paper Mill has already created a dead zone of 30 square kilometers in Baikal’s south.

By the early 1980s the Baikalsk mill had become a rallying point for protesters. The environmental demonstrations led by Russian writer and activist Valentin Rasputin snowballed into a Russia-wide movement, which would become one of the enduring symbols of Mikhail Gorbachev’s glasnost period. Protestors eventually won a concession that the mill’s operations would be terminated by 1993, but the government’s promise was lost in the chaos of the 1990s. In 1999 a law was finally passed prohibiting the production of paper, cellulose, and cardboard, which in particular discharge effluent into the lake.

After the new law was passed the mill switched to a cleaner, “closed” cycle in late 2008, but the factory could not maintain profit margins. It spluttered to a halt and ceased to operate altogether in March last year. Environmentalists celebrated a victory, although it was probably Russia’s economic crisis that dealt the blow to the mill, majority owned by then-beleaguered oligarch Oleg Deripaska’s Basic Element Holding.

But in January 2010 Prime Minister Vladimir Putin removed paper, cellulose and cardboard from the list of materials banned for production—effectively allowing the mill to reopen. Outraged environmentalists immediately alleged that Deripaska had exploited his close relationship with the premier to lobby for amendments to the law.

Both Putin and Deripaska are now loathed by a section of the local Irkutsk population. Despite the soft touch for animals that Putin has become known for (through a raft of stage-managed encounters with animals “captured” by Kremlin hacks), Russia’s prime minister is currently ranked as “Siberia’s biggest enemy,” a poll by BABR.ru, a local news Web site, found. Deripaska ranks second with 15.1 percent of the vote, against Putin’s 41.4 percent, with 31,000 votes cast.

At the time Putin claimed he was creating jobs in Baikalsk, a town of 16,000 that suffered from the closure of the mill where 2,000 worked. Deripaska, for his part, protested that he would install environmentally friendly technology over the next three years, and then hand over his 51-percent stake in the plant to the local authorities. Environmentalists rubbished Deripaska’s suggestion that he would make any upgrades, asserting that it would clearly be prohibitively expensive for owners who had already once shut the asset down as soon as it couldn’t turn a profit.

Possibly feeling the heat of bad press, Deripaska relinquished his controlling stake when he sold his Continental Management subsidiary’s 25.07 percent in the mill to Nikolai Makarov, a Russian businessman, in March 2010. But the factory still started production again.

“Save Baikal” rallies have now become regular and increasingly politicized. Regional protests in the Irkutsk Region have topped 1,000 people, even in the depths of winter. The rallies have also hit the capital. On June 5, six members of the opposition Yabloko party gathered on Red Square with a banner reading “Hands off Baikal,” and were all detained by the police. Speaking to the Kommersant news daily the next day, an activist said “We hope that the president pays attention to this issue and that the premier signs the corresponding order, and that finally they close this factory, which is polluting the most important source of clean water in Russia.”

Petitions have been submitted—the most recent received by President Dmitry Medvedev on June 8—demanding that the Russian president address the issue. In a May Levada Center poll, 39 percent of Russians said they thought the mill should be closed, and 42 percent said they thought budget money should be used to upgrade its technology to make it cleaner. Only three percent said it should stay open to create jobs.
When on June 1, Russian President Dmitry Medvedev appeared to have waded into the conflict, analysts quickly discerned a much-anticipated but utterly opaque “split” in the Putin-Medvedev tandem. The Russian president stressed that his mentor’s January decision “was not final.”