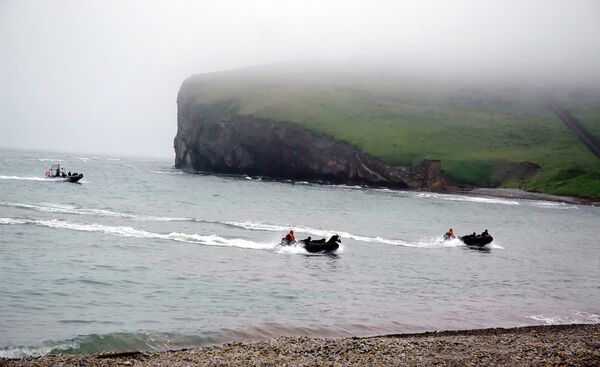 © RIA Novosti . Vitaliy Ankov
/
Go to the photo bank
Subscribe
The large-scale Vostok-2010 military exercises which were conducted over a vast area between the Altai Territory in Western Siberia and Vladivostok in Russia's Far East were the largest war games in post-Soviet Russia.

The large-scale Vostok-2010 military exercises which were conducted over a vast area between the Altai Territory in Western Siberia and Vladivostok in Russia's Far East were the largest war games in post-Soviet Russia.

The exercises involved over 20,000 officers and men, 75 fixed-wing aircraft and helicopters, as well as 40 warships and support ships, all working to assess the three-level troop-control organization comprising strategic commands, tactical commands and brigades, other new elements of the troop-control and logistics-support system and to expose any shortfalls.

Konstantin Makiyenko, deputy director at the Moscow-based Center for Analysis of Strategies and Technologies (CAST), said the latest military exercises had completely refuted widespread allegations that the Defense Ministry was destroying the armed forces with its reform measures.

"Obviously, the army is alive and continues to develop. Units involved in the exercises proved quite battle-worthy, although they arrived from second-line military districts and didn't have the most advanced equipment," Makiyenko said.

High officer morale should be singled out. Most officers want the current army reform to succeed and are hoping for success, Makiyenko told RIA Novosti.

While agreeing with this viewpoint, it should be noted that the situation with junior personnel is somewhat different. Much depends on specific branches and basic training levels. Officers from motorized-rifle units, including battalion commanders, say a reduction in the number of contract soldiers has negatively affected platoon-and-company training programs.

While trying to find out whether current top Defense Ministry officials are up to the mark, it should be noted that Russia currently has the most competent military leaders since the break-up of the Soviet Union.

At the same time, it is obvious that the radical military reform, its tough deadlines, the inevitable resistance of military personnel and a difficult economic situation make it impossible to avoid mistakes.

Major setbacks include the government's failure to facilitate 100% contract service, the social tensions caused by the rapid discharge of officers, a hasty and ill-conceived military-education reform and lots more.

And, finally, Russia's armed forces, doubtless, lag behind the industrial world in terms of technical-equipment levels. All these mistakes affecting the army's basic combat capability must be corrected.

What type of wars should the Russian army prepare for? Obviously, protracted wars between the great powers are now history because nuclear weapons completely rule out such scenarios. The most realistic scenario is the Russian army becoming involved in a local conflict on the border between Russia and another post-Soviet republic and would have to repel regular enemy forces or large insurgent or terrorist units.

Makiyenko said Russia was primarily concerned about Central Asia in the context of a hypothetical low-intensity or medium-intensity conflict involving Russia.

"The United States and NATO are obviously losing control over the situation in Afghanistan and will probably have to leave that country in the foreseeable future. The return of the Taliban movement to power seems to be the most plausible scenario, if this happens. The radical Islamic comeback in Afghanistan will inevitably trigger contention in the conflict-ridden regional post-Soviet republics. The weak authoritarian regimes in Tajikistan, Turkmenistan and Uzbekistan, not to mention Kyrgyzstan which has almost become a 'failed state' may fall prey to the Taliban. Consequently, Russia will have to face the prospect of a huge Asian conflagration and will have to prevent such developments. If Russia fails to do this, then it will have to put out that conflagration in order to preserve its own domestic stability. Hopefully, this reform can yield results before this situation becomes reality," Makiyenko said.

The current military reform has to succeed because Russia will face problems in the next few decades.