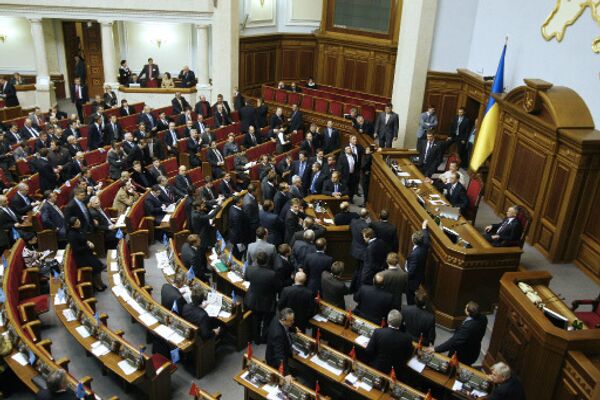 The Ukrainian parliament ratified on Thursday an agreement on the demarcation of the Russian-Ukrainian border.

The Ukrainian parliament ratified on Thursday an agreement on the demarcation of the Russian-Ukrainian border.

A total of 347 lawmakers out of the 425 registered at the parliamentary session voted in favor of the agreement, with 266 votes required for the document's ratification.

Russia and Ukraine signed an agreement to define the border during President Dmitry Medvedev's visit to Ukraine in May, sparking fierce criticism from Ukraine's opposition.

The agreement on the issue, which is crucial for the potential introduction of visa-free travel for Ukrainians to the European Union, was signed by the Russian and Ukrainian foreign ministers on May 17.

In the summer of 2003, a bitter dispute broke out between Russia and Ukraine over the Tuzla Island in the middle of the Kerch Strait, which came to a head when Russia tried to construct a dam on the island. Ukraine accused Russia of encroaching on its territory.

In December of that year, then Russian President Vladimir Putin and his Ukrainian counterpart Leonid Kuchma signed an agreement on the joint use of the Azov Sea and Kerch Strait. Under the agreement, the sea and the strait remain the territorial waters of both Russia and Ukraine.