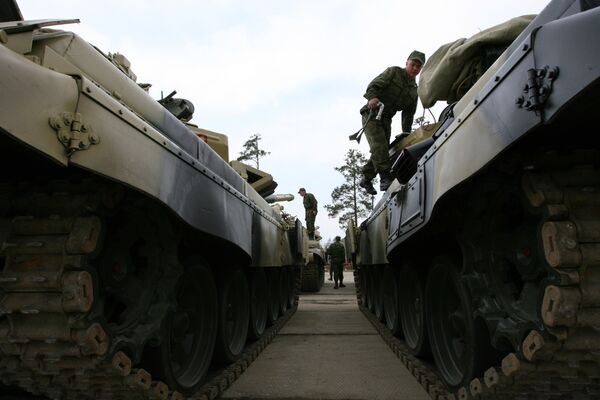 Russia will modernize about 200 T-72 main battle tanks for the Libyan Army over the next few years, a Russian defense industry source said on Wednesday.

Russia will modernize about 200 T-72 main battle tanks for the Libyan Army over the next few years, a Russian defense industry source said on Wednesday.

"A 1.3-bln euro [military-technical cooperation] deal signed between Russia and Libya this year includes the modernization of about 200 T-72 tanks which have been in service with the Libyan Army since the Soviet era," the source close to negotiations told RIA Novosti.

Moscow and Tripoli have been involved in talks on the modernization of the T-72 tanks since 2006 as part of renewed efforts to revive bilateral military-technical cooperation.

Libya was one of the largest buyers of Russian-made armaments in the second half of the 20th century.

Tripoli acquired from the Soviet Union more than 2,000 tanks, 2,000 armored infantry fighting vehicles and armored personnel carriers, about 450 self-propelled artillery pieces, as well as a number of combat aircraft and large quantities of small arms since the beginning of the 1970s.

However, Russia has encountered tough competition with Western nations in arms sales to Libya since the UN lifted sanctions against the African country in 2003, after Libyan leader Muammar Gaddafi announced he would halt the national nuclear weapons program and later accepted responsibility for the 1998 terrorist bombing over Lockerbie in Scotland, agreeing to pay compensation to the victims' families.