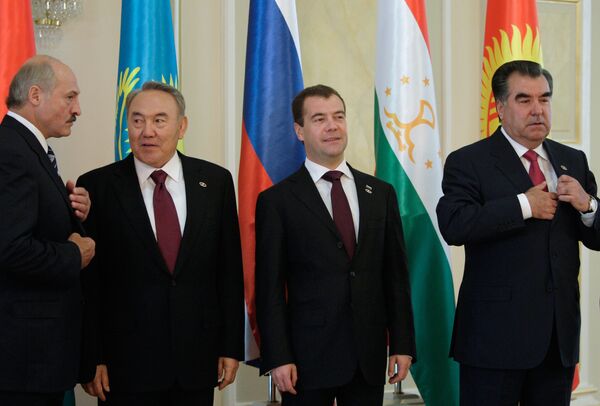 "It [the Customs Code] will come into force in trilateral relations on July 6, and for Russia and Kazakhstan, it came into force on July 1," Medvedev said during a news conference after a session of the member states of the Eurasian Economic Community (EurAsEC) in Astana.

EurAsEC comprises Kazakhstan, Russia, Belarus, Kyrgyzstan and Tajikistan. Its intergovernmental council doubles as the top body of the Customs Union.

The disputed issues between Russia and Belarus include export duties on Russian oil and petroleum products to Belarus and the import of foreign cars and aircraft into the Union's customs territory. The issues delayed ratification of the Customs Code by Belarus.

"A working group has been formed which is studying issues of joining the Customs Union," she told journalists after a session of the EurAsEC intergovernmental council.

Tajik President Emomali Rakhmon also voiced his country's interest in accession to the union. "As regards Tajikistan's accession to the Customs Union, we are addressing it very seriously," he said.

The Customs Union agreement and some 20 other documents, including on the establishment of a common economic space between Belarus, Kazakhstan and Russia and on measures to tackle the consequences of the global economic crisis, were signed at the EurAsEC summit, the Kremlin press service said Monday.

Kazakh President Nursultan Nazarbayev, hosting the current EurAsEC summit, said Monday the next meeting of the organization's intergovernmental council is due in Moscow in mid-December.