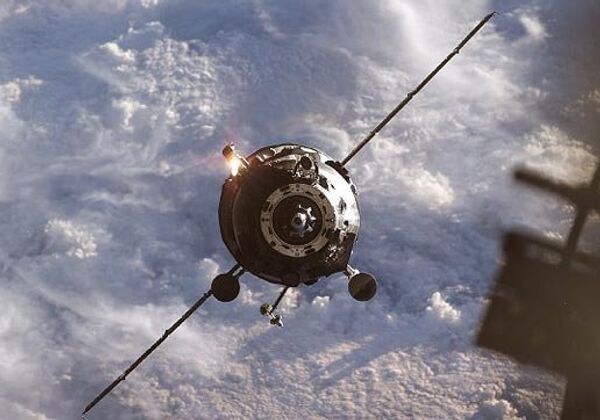 © NASA . http://www.nasa.gov
Subscribe
International
India
Africa
The Progress M-06M cargo spacecraft failed to dock with the International Space Station on Friday due to a failure in its automated docking system, a NASA spokesman said on Friday.

The Progress M-06M cargo spacecraft failed to dock with the International Space Station on Friday due to a failure in its automated docking system, a NASA spokesman said on Friday.

He said that the ISS crew failed to take manual control of the docking process using the TORU docking system that provides navigational data for docking spacecraft.

Russia's Mission Control said there was no emergency situation onboard the cargo freighter.

"Information has been received through the telemetry that there is no emergency situation on board the cargo spacecraft," a source at the Mission Control Center told RIA Novosti.

The spacecraft was about 2 km from the station when the system received a signal to stop approaching the ISS.

He said that a second attempt of docking with the ISS was unlikely to be taken on Friday.

A deputy chief of the Russian Federal Space Agency Vitaly Davydov said that the cargo spacecraft would resume docking with the ISS on Sunday.

"The docking is tentatively scheduled for Sunday. The docking will be carried out in the automated mode," Davydov said.

"The orbit currently occupied by Progress spacecraft does not allow to control its [spacecraft's] flight and get the telemetric information from the Russian ground tracking stations, and [to get the information] from U.S. tracking stations is unreal," Davydov said, adding it would take at least one day to assess the situation.

He added the ISS's cosmonauts had not received further directions.

A NASA source said the cargo spacecraft would dock with the ISS on Monday.

The NASA source also said the Progress M-06M had been transferred into the so-called rotation mode that makes the active operation impossible. This mode helps charge the spacecraft's battery since the Progress entered the shadow zone.

The source added if the batteries ran down, the onboard computer would turn off and the spacecraft would go out of control.